Take a triangular number, multiply it by 8 and add 1. What is special about your answer? Can you prove it?

Adithya from Lexden Primary School noted that there is a pattern to the gap between square numbers, with the gap increasing by two each time. Adithya also noticed a pattern in column A; this was also spotted by James from Wilson's School, Niteesh from Vidyashilp Academy, Dan and Linden from Wilson's School, and James from Eltham College. Here is a picture of Linden's spreadsheet showing the pattern: 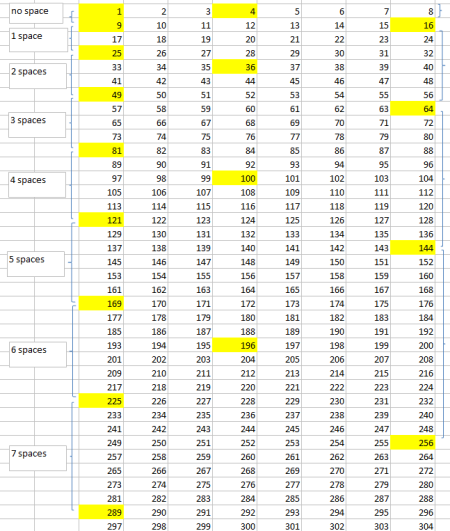 Krystof from Uhelny Trh, Prague, made some comments about which squares appear in each column:

An anonymous solver sent us these thoughts:

Lots of fantastic ideas - can it be proved that these patterns will continue?

Herschel from the European School of Varese, and Simon who didn't give his school both sent us algebraic explanations for some of the patterns. Here is Herschel's solution:

This pattern (A,D,A,H) repeats itself throughout the series, albeit with larger gaps (blank rows) as the numbers increase.

Well done to all those who submitted solutions!
The NRICH Project aims to enrich the mathematical experiences of all learners. To support this aim, members of the NRICH team work in a wide range of capacities, including providing professional development for teachers wishing to embed rich mathematical tasks into everyday classroom practice.