A man has 5 coins in his pocket. Given the clues, can you work out what the coins are?

The flow chart requires two numbers, M and N. Select several values for M and try to establish what the flow chart does.

This game provides an opportunity for learners to consider strategy and thinking ahead. Playing the game could provide a starting point for reading about mathematical ideas such as the Four Colour Theorem.

The game works well when played in pairs. Learners could use pencil and paper, or perhaps whiteboards. Once everyone has had the chance to play the game a few times, the class could discuss any strategies they came up with and explain anything they noticed while playing the game.
If learners play the two colour version described at the end of the problem, they could create some intriguing images for classroom display.

Is it better to go first or second? Does it depend on the curve?
Can you design some simple curves where you can guarantee that you will win?
What do you notice about the number of regions that meet at each vertex?
Can you come up with any strategies to help you to win?

The game could be investigated using various different representations for the curves - one example is a graph such as this: 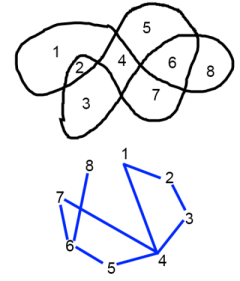 By using the rule that no two connected numbers can be coloured the same, learners could experiment with different curves and investigate the idea that all such curves can be coloured with just two colours.
Further investigation of these ideas at a higher level can be found in the Stage 5 problem Painting by Numbers.

Start with some very simple curves with a small number of regions and work on the problem of how to decide whether to go first or second.