For this activity, you'll need:
Start by folding the square piece of paper exactly in half.

Keep the square folded and hold it so that the fold is on the left or the right. Then cut from top to bottom of the folded square, near the open edges, like this: 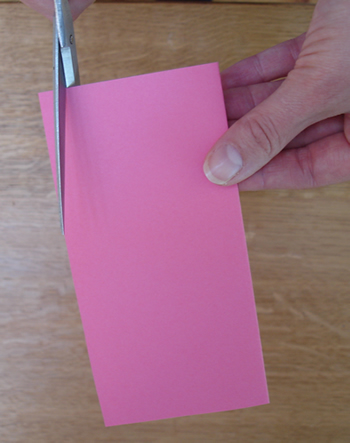 You could cut in a straight line, in a 'zig-zag' line or in a wavy line, it is completely up to you. You should now have two strips of paper and the rest of the folded square.

Repeat this a few times so that each time, you cut off two pieces of paper from the open edge of the rest of the folded square.

You should be left with lots of strips and the folded edge, which you can open out: 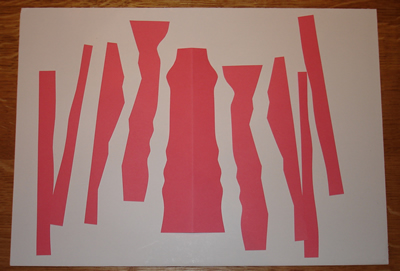 Mark out the centre of the backing paper.

Can you lay out the strips of paper on either side of the folded piece so that they form mirror images of each other, with the fold being the mirror line?

You could create more exploded squares. For example, what happens if you ...

Please do send us photos of your exploded squares. We'd love to see them.

This activity is based on an idea in Mathematics Through Art and Design published by Collins Educational.

This activity consolidates children's understanding of line symmetry. The nature of the task allows learners to explore line symmetry in a creative way, and the resulting pictures will make an engaging and attractive display which will remind children about the mathematical ideas.

The best way to introduce this challenge is probably to demonstrate how to cut the square, step by step, as the children each do the same with a square of their own, or one between two.


Once they have finished cutting, ask them to stick the centre piece down on the centre of the backing paper, but encourage them to arrange the strips of paper before sticking them down! Leave the children to decide for themselves how to create the symmetrical design.


When everyone has made their 'exploded' square, choose some of the pictures to stimulate discussion amongst the whole group. How do they know that there is a line of symmetry? You might select designs that demonstrate innovative ways of arranging the pieces, or those that represent a range of orientations of the mirror line.


Ask the children what they could do differently to make a different kind of exploding square. Give them the opportunity to create another square based on their own idea or someone else's suggestion.


You might want to spend some time at the end of the session asking the children to group their pictures in different ways, and justify their groupings. This is an ideal way to summarise the task in a way that actively involves the learners themselves.

How do you know that this is a line of symmetry?
Tell me about your picture.
What happens if you fold the square of paper in half in a different way?
How could you create a picture with the mirror line in a different orientation?
How about folding two (or more) squares together so that you cut them in exactly the same way but then arrange them differently on the backing paper?
What is the same about these two pictures?
What is different about these pictures?
How could you group these pictures? Can you explain why you've grouped them in that way?

Encourage children to explore what happens when they fold the square more than once. Many children will also have their own ideas to investigate.

Some learners may like to draw in their cutting lines with pencil before using scissors.