A security camera, taking pictures each half a second, films a cyclist going by. In the film, the cyclist appears to go forward while the wheels appear to go backwards. Why?

The diagram shows a very heavy kitchen cabinet. It cannot be lifted but it can be pivoted around a corner. The task is to move it, without sliding, in a series of turns about the corners so that it is facing the other way round.

This problem provides a simple starting point creating attractive patterns using rotations, with the potential to go much further - exploring rotational symmetry, understanding the relationship between coordinates when rotating through multiples of $90^{\circ}$, and practising accurate construction with ruler, compasses and protractor are just a few ideas.

Work on this problem could provide an excellent opportunity for forging cross-curricular links with Art and Design departments.

Begin by showing learners this image, and give them the chance to discuss in pairs anything they notice about it. Share ideas, and ask learners to suggest how they think the image might have been created.

Once they have had a chance to consider the symmetry of the image, show them the second image, which shows how the first image was made. Ask learners to create similar images of their own based on rotations through multiples of $90^{\circ}$ or through other angles using a protractor.
While they are constructing their own images, ask them to think of mathematical questions prompted by their images - these might include some of the lines of enquiry suggested below. Bring the class together during the lesson to share what they are choosing to work on, and at the end of the lesson to share their findings.

What is the relationship between the coordinates of the points as they rotate through multiples of $90^{\circ}$?

Can you use an isometric grid to rotate a shape through multiples of $60^{\circ}$?

What do you notice about the rotational symmetry of images based on rotations such as $30^{\circ}$ or $72^{\circ}$?

Learners could begin by rotating single points through multiples of $90^{\circ}$ using the technique suggested below: 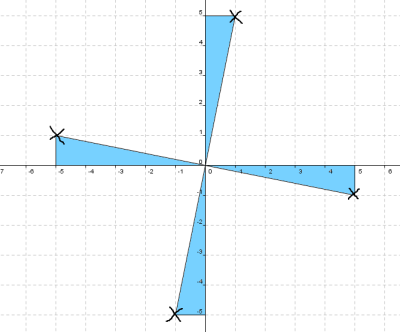 What is the rotational symmetry of your final image if you rotate through multiples of $80^{\circ}$ or $135^{\circ}$?

Can you explain why?
Can you suggest other angles which would give similar effects?
The NRICH Project aims to enrich the mathematical experiences of all learners. To support this aim, members of the NRICH team work in a wide range of capacities, including providing professional development for teachers wishing to embed rich mathematical tasks into everyday classroom practice.