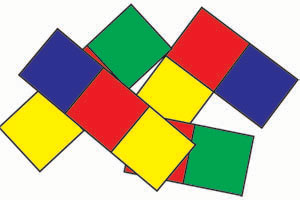 You will be working in a team of four. Ensure that you have plenty of red, green, yellow and blue cubes. You cannot use paper or pencil to help you because you need to listen to what others have to say.


Discuss how you will work together and share your ideas.


Put the pile of 8 cards face down in the centre of the table.

Each member of the team takes a card from the pile in turn (enough for two cards each).


If you have an observer, they might find the following list of things to look for helpful and feed back to the team at the end of the task.

This task encourages the development of team-working skills such as listening, asking questions, finding out what others think, reflecting and making sense of what has been said, and eventually coming to a consensus. If you wish to learn more about these skills and find other team-building tasks look at this article.


In addition learners are expected to use precision in describing an arrangement of objects.

The task is based on a team of four plus an observer.

You will need a collection of red, green, yellow and blue cubes or the equivalent.


Explain the rules before any equipment is handed out as it is important that teams do not look at each other's cards or make notes to help them remember what has been said. This emphasises the idea that everyone has a part to play and reduces the chance of one person taking over the problem and leaving others with nothing to do.


It is good to have an observer in this task but, if this is not possible, the observer checklist might make a good starting point for you to use for feedback.


The cards can be found here: doc, pdf.


NOTE that the card with an array of white cubes indicates the layout of the cubes.


When teams have finished working on the task it is important to spend time asking them to discuss in groups, and then as a whole class, how well they worked as a team, what they have learned from the experience and what they would do differently next time. Your own observations, as well as those of observers, might inform the discussions.

Why not let us know how the children have got on with their group-working skills by clicking on the 'Submit a solution' link?

Learners may like to try one of the other 'All for one' tasks. Other team-building tasks can be found by going to this article.

Learners can reveal one (or more) of their cards at a time. Other team-building tasks can be found by going to this article.