You have been given three shapes made out of sponge: a sphere, a cylinder and a cone. Your challenge is to find out how to cut them to make different shapes for printing.


Mrs Bunting's class was playing a game using interlocking cubes. All the boys took a red cube and all the girls took a green cube.

The children then got into four groups according to their pair of cubes.
Can you explain what these pairs of cubes stand for?
Mrs Bunting showed them a way of recording the way they had sorted themselves into different groups, called a tree diagram.
At the bottom were all the pairs of cubes. Then they divided into two branches. The red cubes went to the left and the green cubes went to the right.
Then they divided into whether they had black cubes or yellow cubes. Now there were four branches.
Here is the tree diagram: 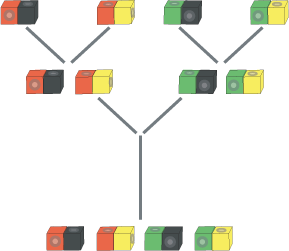 The next day they did the same again except that this time, they had three cubes each. As well as a having a green or red and a yellow or black, they took a brown cube if they had brown eyes and a blue cube if they had blue eyes.

How many different groups were there then? Can you draw the new tree diagram?
What happens if no one had dark hair and blue eyes? How could you show that?

This problem is designed to introduce, and practise making tree diagrams in a way practical for young children. It is primarily a group activity. You will need some interlocking cubes in various colours and some large sheets of paper. A mirror in the classroom would help the children decide on their hair and eye colour.

You could start by physically doing the activity like Mrs Bunting's class in the problem. Ask the group to collect a cube according to whether they are a girl (green cube) or a boy (red cube). Then they should decide for themselves whether their hair is light or dark, getting their friends to help if they want, and taking a yellow or black cube accordingly.
Then they could put their two cubes together, and you could first of all ask them to gather in two groups - green cubes and blue cubes. What do these two groups tell us? Then invite them to join with everyone who has exactly the same cubes as them, which will give the four groups as in the problem. Again, ask them to explain what the groupings mean.
Bring everyone together in front of the board and display the tree diagram in the problem. Try not to say too much at this stage but ask the children to talk in pairs about what they think the picture shows. Can any pairs help to explain what they see? Look out for those children who recognise it as a way to show the sorting that they have just done. You could emphasise how the diagram was made by physically doing the groupings again, but this time referring to the picture as you go.
After this (which could be the next day as in the problem) the children can take a further cube to represent their eye colour (again they will have to decide for themselves whether this is nearer blue or brown). They could then work with a partner or in a small group to try to make the second tree diagram.
Any work done could be displayed and discussed, and perhaps a teacher-led final second diagram made. It might be that some children have started their diagram by sorting between eye colour or hair colour first rather than boy/girl as in the problem. This will make an interesting discussion point - does it matter which characteristic is chosen first?

Which coloured cubes are you going to take? How will you decide?
How many different groups will there be?
Can you make or draw the new tree diagram?
What happens if no one has dark hair and blue eyes? How could you show that?

For learners who found this straightforward, you could ask them to introduce another set of criteria of their choice.

This task is best done in collaboration with others so encourage children to talk to each other and work together. Many children will be able to make the picture out of the cubes but may find recording on paper more difficult so you could take photos of their cube pictures.