This problem follows naturally from X-Dice, although it may be attempted independently. 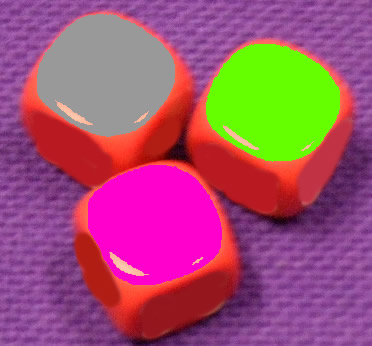 A company wishes to produce a set of three different 6-sided dice coloured Apple Green, Bright Pink and Cool Grey, called $A, B$ and $C$ respectively.

They are to be made with the following properties:

Invent a set of such dice.

What is the probability that each of your dice wins or loses over each of the other dice?

These dice exhibit a property called non-transitivity. Other examples of non-transitivity are found in voting systems. You can read about this in our article Transitivity.
The NRICH Project aims to enrich the mathematical experiences of all learners. To support this aim, members of the NRICH team work in a wide range of capacities, including providing professional development for teachers wishing to embed rich mathematical tasks into everyday classroom practice.