One Tuesday Miss King said that William's group were going to make biscuits. There were four children in the group besides William. They are Ali, Jess, Karni and Danny.

William, Jess, and Karni were going to work together to make biscuits with chocolate chips in them.

Ali and Danny were going to make ginger cookies.

When Miss King took Ali and Danny's tray of biscuits from the oven they looked like this: 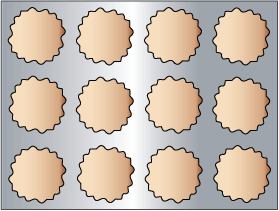 How many biscuits did they make?

"Let's share them out!" cried Danny, "There are lots of biscuits! We'll get lots each, won't we?"

If they shared them between just Ali and Danny, how many would they get each?

"What about Will, Jess, and Karni?" objected Ali, "They should get some too."

Just then Miss King took the other tray of biscuits from the oven. They looked like this: 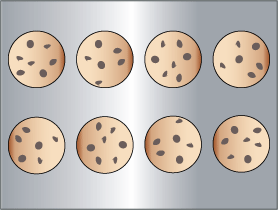 How many biscuits did the three of them make?

"Ooh! They smell good!" exclaimed William.
"Can we eat them now?" asked Karni.
"We will have to cut some of them up, if we are going to divide them between us fairly," said Jess thoughtfully.

If they shared them between the three of them, how many would they get each?

Ali looked at both trays. He counted all the biscuits. How many were there altogether?

They decided to share all the biscuits between all five of them. How many did they get each?

"What about Miss King?" Danny asked suddenly. "She might like some biscuits too."
Can they share all the biscuits equally between the five children and Miss King?
How many more biscuits could they bake so that they could share them fairly without cutting any of them up?