Two brothers were left some money, amounting to an exact number of pounds, to divide between them. DEE undertook the division. "But your heap is larger than mine!" cried DUM...

Nicholas from St. Mary & St. John, Ehab from Walton High School, Amy from Bristol Cathedral Choir School and Amy from Long Field Academy, all in the UK, all used the ratio of lemon juice to water. This is Nicholas' work:

Zeynep from Walton High School, Lydia from Hymers College and Louis, all in the UK, and Samaira from Prospect Primary School in Australia, used ratio/scale factors between the two lemonade mixes. This is Zeynep's work: 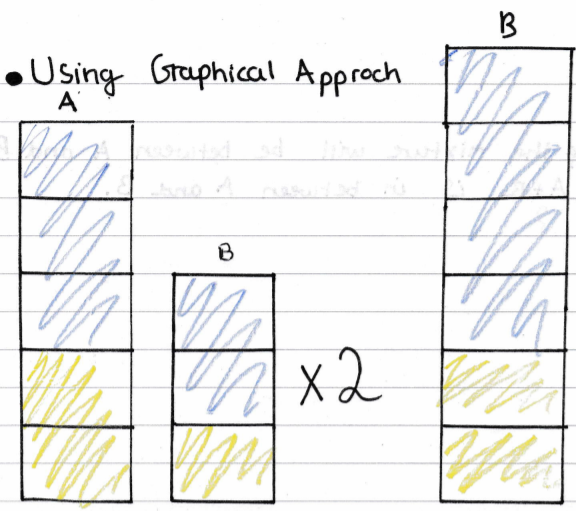 Multiply B by 2. Then A and B will have the same amount of lemon. But B has more water. Therefore, A is the stronger tasting lemonade.

Louis explained it in a similar, but different way:

Amy from Bristol Cathedral Choir School looked at the difference between water and lemon juice relative to the total amount of lemonade:

After a while of looking at this problem, I realised that there was a shorter but slightly more complex way. I realised that the difference between both glasses' water and juice was 100ml: each one had 100ml more water than juice. As a proportion, the extra 100ml would matter less in a larger glass, so therefore the larger (first) glass was stronger.

Which method is better? Ehab wrote:

When the denominators are exact multiples of each other, you can make the fractions equivalent and it’s the most efficient way.

In some questions, with bigger numbers its easier to divide (for example) $200\div300$ and $100\div200$ to find which is biggest or smallest amount.

Will the strength of the combined mixture always be between the strengths of the two lemonades? Carola wrote:

The mixture of A and B could be the same as A and B, if A and B are the same. Otherwise it will be stronger than B and weaker than A - between the two.