Ohm's law forms the basis for all DC electrical circuit analysis. It was first suggested by Georg Simon Ohm in 1826 that the current flowing in a uniform conducting wire is directly proportional to the potential difference between its ends. The constant of proportionality relating V and I is known as the resistance R. The unit of resistance is the ohm ($\Omega$).

In the simple circuit shown, a battery (or source) delivers current to a resistor. Arrows are used to indicate the sense of the voltage and the direction of the current. Although electrical current is actually the flow of negatively charged electrons, by convention, current is said to flow from high to low potential, as though it were composed of positive charges.

Many electrical devices have I-V characteristics that vary in a non linear fashion. Such devices are termed non-linear and do not obey Ohm's law. Examples include filament lamps, diodes and thermistors. The resistance of a non ohmic device may vary with time.

Electrical resistance is a consequence of electrons colliding with ions and losing mechanical energy.

For the case of the filament bulb, an increasing voltage causes the temperature of the filament to rise and as a result the ions begin to vibrate with greater amplitude. This leads to a higher frequency of collisions between electrons and ions; the resistance of the component has hence increased.

NTC thermistors are typically constructed from semi-conductor materials. As voltage increases the temperature of the semi-conductor rises, energy becomes available to liberate electrons from their atoms, the charge carrier density and hence the current increases in a non-linear fashion with voltage.

Electrical power is the rate at which electrical energy is transferred. Its units are joules per second, or watts.

Resistors connected in series will have a common current passing through them. The voltage drop across each resistor may be different but all such voltages will sum to the voltage of the supply.

Resistors connected in parallel will have a common voltage across them but may have a different current through them.

Question:
Using Kirchhoff's laws, find the current flowing through each of the components in the diagram below.

We therefore have 3 independent equations and 3 unknowns.

Using equation 1 we can eliminate $I_1$ from equation 2

If we now solve this equation simultaneously with equation 3 we find that:

Most electric and magnetic devices use alternating or fluctuating currents. The two main reasons for this are concerned with power transmission and information processing. Firstly, an alternating electric power may be made available at almost any desired voltage and current level by the use of a transformer. Secondly, fluctuating currents serve a great purpose in information transmission. For example, a microphone will convert the spoken word into a current which has frequency equal to that of the speech. We are hence able to convert physical information into electrical data which we may then process. It is often useful to consider an alternating voltage or current as a sinusoid. In fact, this may not always be the case; the current through a microphone will often take some other form. However, it is true that we may represent any periodic function as a infinite series of sinusoids. This is known as a Fourier series. The Fourier series will not be discussed further here but it may be of further interest to the reader.

We often represent voltage in the form:

where $V_0$ is the peak voltage and $f$ is the frequency of oscillation.

Such a voltage would cause a current of the form:

If the load is completely resistive (there is no inductive or capacitive component) then the voltage and current will be in phase and $\phi = 0$.

If there does exist some capacitive or inductive load then the impedance is complex. We represent the total impedance as a complex number, in the form $A + B\bf{i}$.

Complex numbers are used extensively in the analysis of AC circuits. We will begin by first discussing the basic principles of complex numbers.

A complex number is a number which comprises both a real and imaginary part. Such a number will take the form:

We can represent this in the complex plane (argand diagram). On the horizontal axis we plot real numbers and on the vertical axis are the imaginary numbers. Here is an example of an argand diagram: 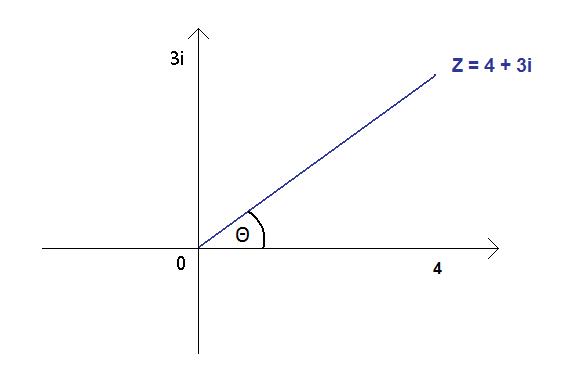 We may also represent complex numbers in both polar and exponential form.

It is good practice to add and subtract complex numbers in Cartesian form whilst multiplying and dividing in exponential (or polar); this simplifies calculations greatly.

This complex number therefore has a magnitude $R =5\sqrt5$

We know that the impedance of a resistor is simply R, this is purely resistive; in complex form this is written as $R + 0i$.

Coupling Capacitor:
Coupling capacitors are placed in series with a component, its purpose is to filter DC signals whilst allowing AC signals to pass.

Bypass Capacitor:
Bypass capacitors are connected in parallel with a component, at high frequencies they short circuit this component (the current is allowed to bypass). The bypass capacitor conducts an alternating current around a component whilst allowing DC through it, it can be used to filter electric noise caused by ripple voltages.

The impedance of an inductor behaves in the opposite manner to the capacitor - its impedance is proportional to frequency.

The frequency dependent characteristics of inductors and capacitors enable the creation of many useful circuits, these include high pass, low pass and band pass filters.

Band Pass filter:
By combining the properties of the high pass and the low pass filter we can accomplish a band pass filter. At low frequency the majority of the input will be dropped across the capacitor whilst at high frequency it will be dropped across the inductor. There exists a small range of frequencies at which an appreciable voltage will be output, this occurs when the impedance of the capacitor matches the inductor and is known as the resonant frequency.