A moving aeroplane is constantly hitting gas molecules, causing compression waves which move away from the aeroplane at the speed of sound.

If we simplify an aeroplane as a small, slowly moving particle that produces sound waves in all directions, then a 2D slice of the wavefronts in the $(x, y)$ plane would look like almost concentric circles, as follows: 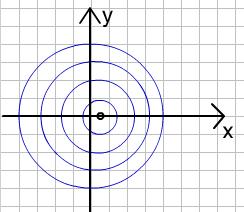 An aeroplane moving slowly, relative to the speed of sound

In the context of sound waves, why is Mach $1$ important?

What would the situation be for a typical commercial airplane?

Tip: A pair of compasses would help you to draw clearer circles.

What goes wrong with the description of your shape for aircraft speeds slower than the speed of sound?

Aside: You can still make sense of this shape using complex numbers, although it does not 'exist' as such. You might like to investigate this idea to test out your skill with complex numbers. For example, how does the result relate to the physical situation? See the solution for more details.

Extension: You might like to think about the patterns of wavefronts for aircraft moving along curved trajectories.