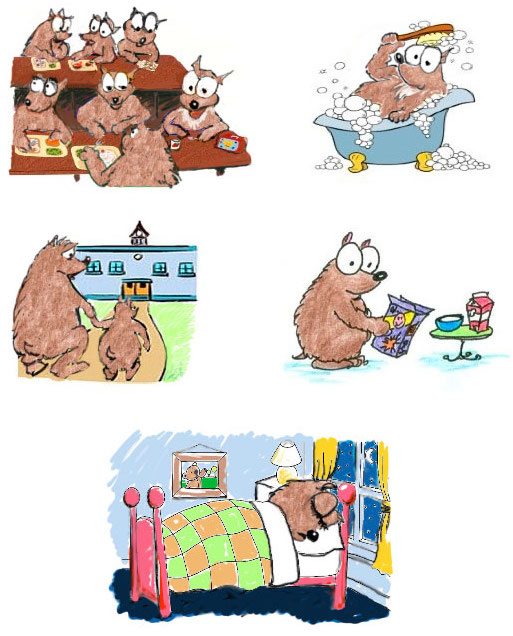 Here are five pictures showing something happening at different times of the day.

Have a good look at each one. What do you see in the picture?  What is happening? Could you describe it to someone else?


You could use these pictures in different ways. For example:


1. You could put them into an order in which you think they might happen through a day.
2. You could suggest what time these things happen in your day.
3. You could see how many hours might pass between pairs of pictures you have chosen.
4. You could draw another picture that might 'fit' between two of the pictures.
5. You will have your own ideas too...

Please let us know what you try.

This activity is a good way to familiarise children with vocabulary associated with the passing of time. It will lend itself to quality pupil-pupil and pupil-teacher talk as learners justify their ideas to someone else.

You could start by showing each picture on its own and asking the children to talk in groups about what they see. (It may be useful to print off this sheet and cut out each picture as a separate card. You could then give each group a set of the cards, which could be used on many subsequent occasions.) You may agree on what each picture shows, or you may decide that each group will have its own interpretation.


You could start off by asking children to order the cards according to what happens in their day, encouraging them to use words such as "before", "after", "earlier", "later, "morning", "afternoon", "evening", "first", "second" etc. You may want each group to display their ordering on a board or wall so that they can explain their thinking to the whole class. You could invite them to suggest how the ordering might change if they described someone else's day. What about a baby brother or sister, for example?


Depending on the experience of the group, you can then lead into giving timings for each activity. This could be a good way of introducing some key times to the hour or half hour using an analogue clock.


Having the cards available for children to use out of choice in the classroom will mean that they will come up with more ideas that you can easily turn into a challenge.

Children could create pictures to reflect key events in their own day and ask others to sequence them.  Alternatively, you might discuss when their day looks different to the pictures in the problem, for example on a weekend or during a holiday, and they could draw new pictures to represent that day. You could invite learners to talk about how different seasons might affect the ordering, for example in the winter, they might wake up when it is still dark. Some pupils may be able to go on to ask more questions and suggest further ideas based on the original pictures.

Some children might find it useful to have a large sheet of paper with five boxes drawn in a horizontal line so they can physically move the cards into particular positions and not lose track of which is first etc.