I then considered a configuration of 3 charges particles.

I considered whether an equilateral triangle of like charges, with an unlike charge in the centre, could be finely balanced in a plane. Of course any nudge outside of the plane would break the equilibrium. This has the potential to be stable: consider particle $A$ in the diagram; the horizontal force from particles $C$ and $B$ will cancel out leaving a net force in the positive vertical direction. By choosing the magnitude of the central force, we can cancel out this force. 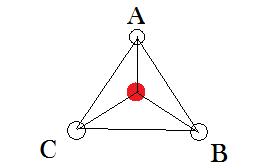 Seeing this, I wondered if it might be possible to find a general result for a regular polygon with a central unlike charge (perhaps $q_v = \sqrt{\mbox{polygon order}}q_c$?)

I am reasonably convinced by this that it would be possible to find a stable choice of charges for any regular polygon with an unlike charge in the centre.

I am also sure it would work for a regular polyhedron.

It is not possible to have an arrangement such that only one charge moves due to Newton 3. It is possible that only 2 move, for example three like charges equally spaced

If one were fixed, of course it would be possible that just one could move.

As mentioned, the planar configurations above are not stable. But what about a 3-D configuration, such as a tetrahedron with an unlike charge in the centre?

I wondered if a tetrahedral arrangement would be stable, and decide to find the appropriate charges, and then mathematically move the central charge by an amount $\delta$, to see if the result was enlightening.

Having done this, I was glad it was an interesting exercise in proving the earlier part of the question in 3D rather than simple planar arrangements, because I realised it probably wasn't necessary for the last part of the question. Because it looks quite simply that if you move the central charge some amount $\delta$ towards a vertex, that vertex will have a net attractive force, and the other vertices will have a net repulsive force, and so the arrangement will tend to fly apart. Although I did not reach a conclusive mathematical proof of this.

One possibility for a stable configuration might be to have unlike charges orbiting. We know from our own solar system that mathematically similar arrangments are not broken up by slight nudges.