M is any point on the line AB. Squares of side length AM and MB are constructed and their circumcircles intersect at P (and M). Prove that the lines AD and BE produced pass through P.

First, try the problem Circles in Quadrilaterals to familiarise yourself with the properties of tangential quadrilaterals.

A bicentric quadrilateral is both tangential and cyclic. In other words, it is possible to draw a circle inside it which touches all four sides, and also to draw another circle around it which passes through all four vertices. (The two circles do not necessarily have the same centre!)


Here is a picture of a bicentric quadrilateral. 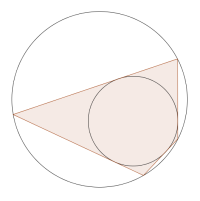 Think about special quadrilaterals, such as squares, trapezia, and parallelograms.


Verify that this formula gives the correct area for the examples of bicentric quadrilaterals you have found.