Fergus and Nathan from Rutherglen Primary sent in all these. They are good. Once you've got these you can have a look to see if any are the same. I've circled in a reddish colour those that end up the same by simple turning. I've circled in a blue-ish/greenish colour those that if they were flipped over would be the same. I'm very pleased with the efforts these boys have put in. 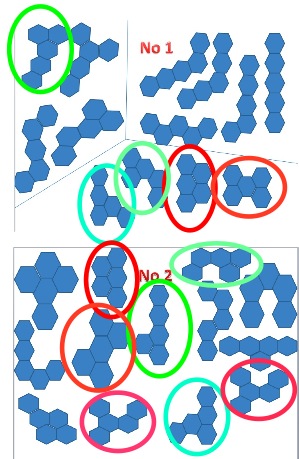 Hannah from Herts and Essex High School sent in this really colourful solution. I have again taken this further and joined together with reddish circles those that - ignoring colour - would be the same through turning. I do think that colouring in makes them so different! 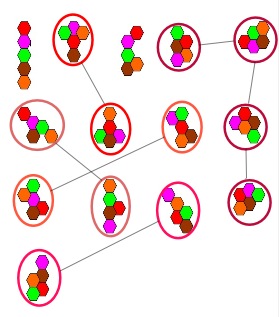 Four other pupils from Rutherglen Primary School: Hannah, Laura, Sarah and Aleisha, found out that hexpentas started off quite easy but at some stages it got a bit challenging. They sent in the following:

First we started off with setting out the straight ones and then moving one every time. The hardest part was figuring out if we had them all and trying to make a system.
After that we counted all the hexagons to see if we had five in each. The easiest part was counting them and seeing if there was five hexagons in each shape. Then we counted all the shapes and we got about twenty, but I think we could have created more! 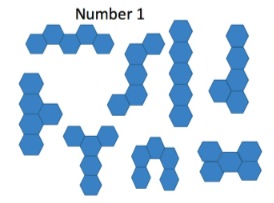 How about children can make their own pattern and learn by that.

I agree that it is very good if pupils make their own versions of the challenges.

Well done to all those who sent in solutions. I hope you enjoyed the activity and maybe can take it further.