Brian swims at twice the speed that a river is flowing, downstream from one moored boat to another and back again, taking 12 minutes altogether. How long would it have taken him in still water?

Two boats travel up and down a lake, each at a constant speed. They turn at each end without slowing down. The boats start at opposite ends of the lake. 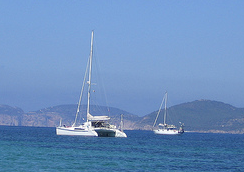 If the boats travel at the same speed, whereabouts on the lake will they meet for the first time? What about the second time they meet? Other meetings?

What would happen if one boat travelled twice as fast as the other?

Investigate where the boats will meet for other ratios of speeds.


Once you are confident at working with boats travelling at different speeds, why not try this challenge?

Can you work out the length of the lake and the ratio of the speed of the boats from the following information?

Investigate the ratio of the speeds and the length of the lake when you change these distances. Can you find and prove a general result?


This problem is also available in French: Bateaux Sur Lac