In this problem we are faced with an apparently easy area problem, but it has gone horribly wrong! What happened?

Straight lines are drawn from each corner of a square to the mid points of the opposite sides. Express the area of the octagon that is formed at the centre as a fraction of the area of the square.

This problem follows on from How Steep is the Slope?

It's easy to draw parallel lines - just check that the gradients match.

But I'm finding it harder to draw perpendicular lines. Here are my best efforts so far but I don't think they're quite right! 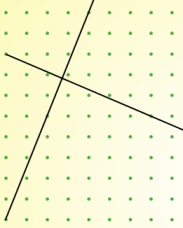 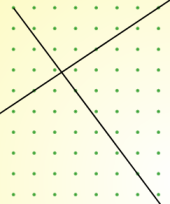 I know that the sides of a square are at right angles, so if I learn to draw tilted squares I may be able to find an efficient method for drawing perpendicular lines.

Here are some pairs of coordinates which can be joined to make straight lines.
Decide whether the two lines are perpendicular or not, and explain how you know.
Can you decide without plotting the points?