Edward Wallace based his A Level Statistics Project on The Mean Game. Each picks 2 numbers. The winner is the player who picks a number closest to the mean of all the numbers picked.

In fact, such a set of sequences occurring by chance is exceedingly unlikely (as determined experimentally) and thus points to structure in the code.

The text is the opening paragraph of Frankenstein, in which cqiog, hgzwp, jyqeo correspond to the strings "light", "ation", "which" etc.

You can see the encrypted text below:

I am already far north of London, and as I walk in the streets of Petersburgh, I feel a cold northern breeze play upon my cheeks, which braces my nerves and fills me with delight. Do you understand this feeling? This breeze, which has travelled from the regions towards which I am advancing, gives me a foretaste of those icy climes. Inspirited by this wind of promise, my daydreams become more fervent and vivid. I try in vain to be persuaded that the pole is the seat of frost and desolation; it ever presents itself to my imagination as the region of beauty and delight. There, Margaret, the sun is forever visible, its broad disk just skirting the horizon and diffusing a perpetual splendour. There?for with your leave, my sister, I will put some trust in preceding navigators?there snow and frost are banished; and, sailing over a calm sea, we may be wafted to a land surpassing in wonders and in beauty every region hitherto discovered on the habitable globe. Its productions and features may be without example, as the phenomena of the heavenly bodies undoubtedly are in those undiscovered solitudes. What may not be expected in a country of eternal light? I may there discover the wondrous power which attracts the needle and may regulate a thousand celestial observations that require only this voyage to render their seeming eccentricities consistent forever. I shall satiate my ardent curiosity with the sight of a part of the world never before visited, and may tread a land never before imprinted by the foot of man. These are my enticements, and they are sufficient to conquer all fear of danger or death and to induce me to commence this laborious voyage with the joy a child feels when he embarks in a little boat, with his holiday mates, on an expedition of discovery up his native river. But supposing all these conjectures to be false, you cannot contest the inestimable benefit which I shall confer on all mankind, to the last generation, by discovering a passage near the pole to those countries, to reach which at present so many months are requisite; or by ascertaining the secret of the magnet, which, if at all possible, can only be effected by an undertaking such as mine.

Mookie Chau even sent in a newly created code! We will include this on the site soon.

Reading through the problem, my initial thought was that Alice was right.
That many strings of 5(and more)or statistically quite unlikely and, in any
case, the letters are very unlikely to be "randomly generated
text". I did some more investigations to check- I found the
differences between the ends of the identical strings of letters.

The noticable thing about these results is that they are all divisible by
5.
This adds strength to Alice's argument, making it less likely to be
coincidental.

I decided to try putting the letters into columns of 5. Though the
frequency analysis shows that it is not a letter for letter code, it could
be a polyalphabetic code (where more than one ciphers are used in
alternation).

I found the frequencies for the first column, made them into a graph and
matched it with the English frequencies. It was quite clear from the
patterns that it was a caesar shift, with plaintext a matching with cipher
text n. Feeling encouraged, I substituted that column and found the
frequencies for the others. After quite a long time trying to get my
computer to do what I wanted it to, I arrived at an answer which (mostly)
made sense. Filling in the word gaps gave the solution.

Kirsten continued to work out some probabilities:

I worked out the probability that ONE set of five
letters are the same for randomly generated letters of about 1600 letters:

Firstly, at first glance, it seems that the frequency looks random which is not encrypted by monoalphabetic substation cipher method. In order to prove my hypothesis, Index of Coincident (IC) is calculated which is 0.044. Since the value is closer to the IC of Polyalphabetic substitution cipher method (0.038), it suggests that the plaintext is probably encrypted by Vigenere (one kind of periodic substation cipher). The IC value is calculated by a program online which you can find it from http://www.caconsultant.com/maths/ under frequency analysis.

Before identifying the keyword used to encrypt the text, the length of the keyword should be found. It can be done by look for the sequences of letters that appear more than once in the ciphertext. The most likely is that the same sequence of letters in the plaintext has been enciphered using the same part of the key. Below is the list of sequences which appear more than once and their spacing between 2 of them is identified.

By finding their common factor which is 5, this probably suggests that the key only contains 5 letters.

We proceed as follows. We know that one of the rows of the Vigenere square, defined by L1, provided the cipher alphabet to encrypt the 1st, 6th, 11th, 16th, … letters of the message. Hence we should be able to use old fashioned frequency analysis to work out the cipher alphabet in question. Below is the frequency analysis of different columns (i.e. different letters): 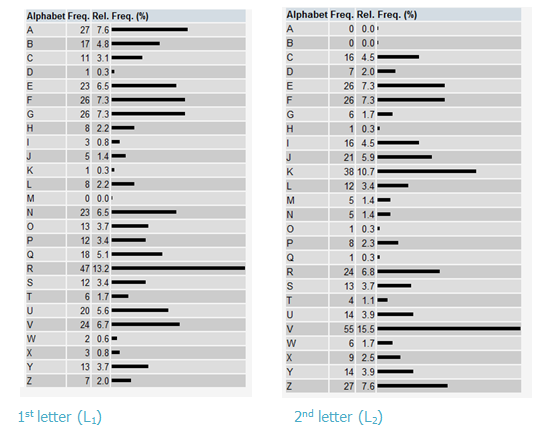 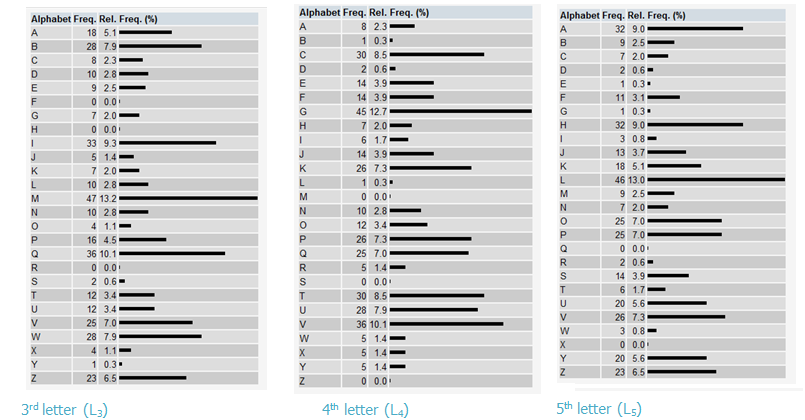 By using simple substitution cipher method to decode it (for example, the highest frequency of letters are “e”, “t” and “a”), the key of the Vigenere can be found which is NRICH in this case.

Finally, using the program of the wesbite http://www.caconsultant.com/maths/, the whole plaintext can be recreated. In this example the plaintext is extracted from Frankenstein, Letter 1 written by Mary Shelley.

Maria from the UK writes: 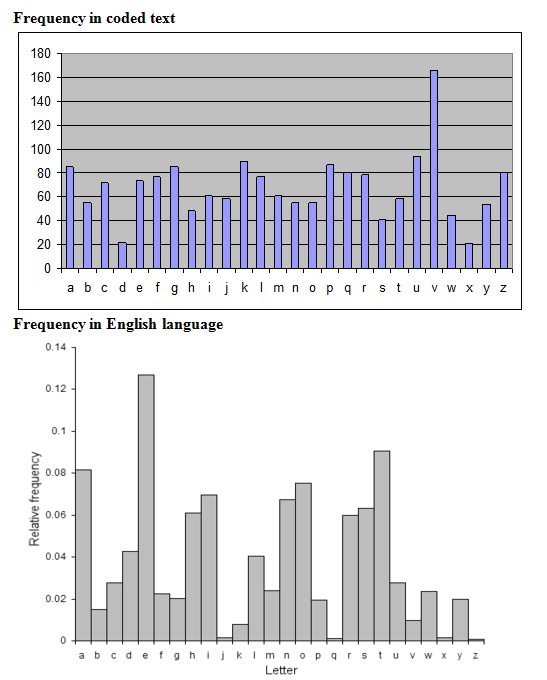 (this is the number of pairings multiplied by the probability of 2 being the same). So the probability of this happening 7 times in the same set of 1776 characters is approximately $\frac{1}{8^7}$, or about 1 in 2 million. In other words, it would appear that the code we have been given is almost certainly not random, and these 5 letter strings are significant.

To investigate them further, we count the number of character between each of the 7 5-letter repeats, finding:

Continuing in this way with the other 4 sets of letters, we discover, (perhaps unsurprisingly!) that the codeword for this Vigenere cipher is NRICH. We end up with the text:
IAMALREADYFARNORTHOFLONDONANDASIWALKINTHESTREETSOFPETERSBURGH…
We can easily add spaces to this, obtaining:
I am already far North of London, and as I walk in the streets of Petersburg…
A quick Google of this passage, and we discover that the text encrypted is a paragraph of Letter 1 from Frankenstein by Mary Shelley. =)