Given a probability density function find the mean, median and mode of the distribution.

By exploring the concept of scale invariance, find the probability that a random piece of real data begins with a 1. 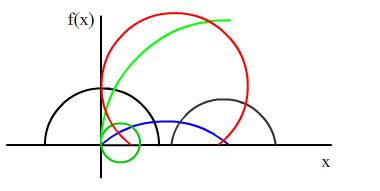 If the radius of the circle forming the arc of the pdf is $1$, what is the maximum value that the random variable could possibly take?

Which of the other arcs are possible candidates for probability density functions? Can you invent mathematical scenarios which would lead to these pdfs?