The idea is to arrange these digits in the five boxes to make four-digit numbers as close to the target number as possible.
You may use each digit once only. 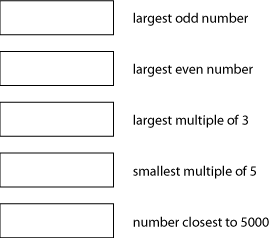 This activity has been adapted from one of BEAM's free Maths of the Month resources, which unfortunately are no longer available. You can play it as a game against a friend using this sheet from BEAM.

This problem would fit in well when members of the group are partitioning, rounding and ordering four-digit whole numbers. It requires considerable understanding of how the number system works. Playing the game, and discussing it afterwards, can really help to develop a firm concept of place value.


Next you could introduce an item in the problem such as making the largest possible even number using only two of each digit. Alternatively, you could make up your own examples such as the smallest even number or the nearest to $7000$. You will need to establish whether $0$ can be used at the beginning of a number. This, in itself, can form an interesting discussion point. (The final decision itself does not matter - it is the reasons that are important, and the fact that the children feel as if it is their decision!)


Probably the best way of continuing on this problem is to use this sheet from BEAM and for learners to work competitively in pairs. It is ideal if each player can also have two sets of digit cards to use to make the numbers.


Once learners have played a few times, instigate a general discussion on the best strategies and the nearest that anyone got to the target. You could repeat what you did at the start and give learners numbers such as $2681$ and ask them how they would rearrange this to make the highest/lowest number possible and why this is so. This will make a good assessment opportunity.

Why have you put a $5$ here?
Where is the best place to put $9$ when you are aiming for the lowest/highest number?

Learners could make up their own criteria for a new game possibly using four five-digit numbers.

Children could use this simpler version of the problem.