When it's the end of January and we need to turn over a page of our calendar, the next page may look a bit like this: 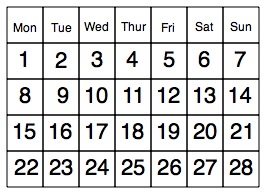 Of course, it probably has a good picture on the page as well, perhaps of a scene from a T.V. show or an animal from your favourite story book.

If we ignore the edge squares which tell you what day of the week it is, then we have a rectangle with twenty eight squares in it like this:- 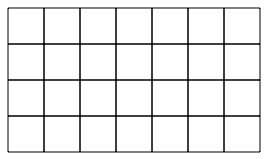 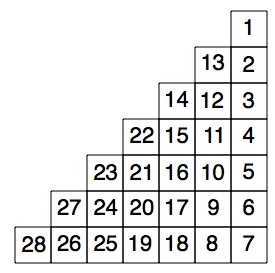 What other wonderful designs can you come up with?


You can then go further by looking at the way the numbers are arranged and see if you can spot any patterns. For example in the first usual way:- 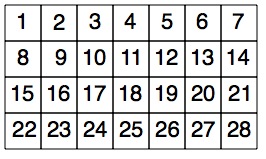 2. Going down any column the numbers increase by $7$.

Do let us know what you discover in the designs you have created. Can you explain why the patterns occur?

This activity is useful for helping learners to identify and explain number patterns. It is one that can help the more reluctant see that numbers and mathematics can be absorbing. It also has strong design and art links.

You could start by showing the group some examples of various styles of calendars and encourage them to talk about the ways the months are laid out. Then show the class the picture of the calendar in the problem and invite them to talk in pairs about any number patterns they see in it. Can they offer any explanations? Next, show the second arrangement of the twenty eight squares. What number patterns can they see now?

You could then give them all a piece of $1$ cm squared paper and suggest they explore different arrangements of the twenty eight squares with the numbers arranged in some logical order. In the same way, they can look for any patterns of numbers that appear. If they work in pairs they will be able to talk through their ideas with a partner.

How else could you arrange the squares?
How will you write in the sequence of numbers?
Can you explain why this pattern of numbers occurs?

Learners could move on from the calendar situation and arrange other numbers of squares in an interesting way. They could be asked "What would be a good new number to try?" and "Why?".