If it takes four men one day to build a wall, how long does it take 60,000 men to build a similar wall?

Mo has left, but Meg is still experimenting. Use the interactivity to help you find out how she can alter her pouch of marbles and still keep the two pouches balanced.

In the ancient city of Atlantis a monument called a Zin Obelisk was built in honour of the goddess Tina.

The structure (a cuboid) took less than two weeks to complete.

Your task is to determine on which day of the week the monument was completed.

You will need a set of information cards to solve the problem.

For the set, you'll need to print off this Word document or this pdf. 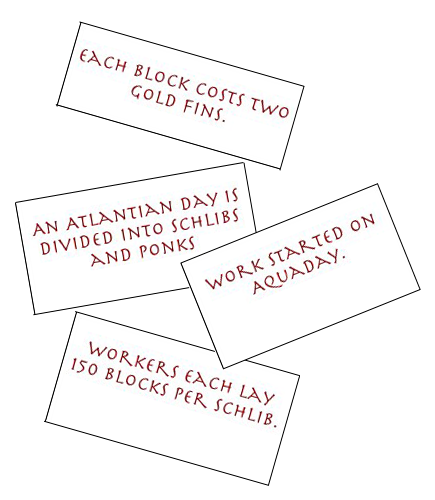 The original version of this problem appeared in "Improving Work Groups: A Practical Manual for Team Building" by Dave Francis & Don Young.