A triangle ABC resting on a horizontal line is "rolled" along the line. Describe the paths of each of the vertices and the relationships between them and the original triangle.

A rectangular field measuring 17.5 metres by 10 metres has two posts 7.5 metres apart with a ring on top of each post. The posts are approximately 7 metres from the nearest corners as shown in the diagram. You have two quarrelsome goats and plenty of ropes which you can tie to their collars and you want them to be able to graze the whole field between them. How can you secure them, using the posts, so they can't fight each other, and how much rope is needed? 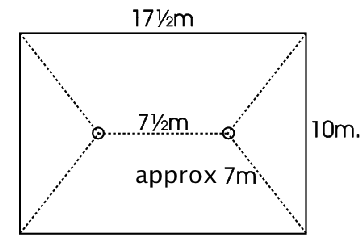