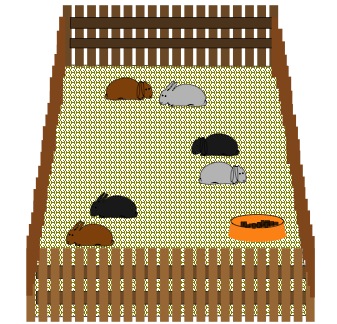 This problem is a good context for taking pupils beyond just straightforward arithmetic, by also giving them the opportunity to extend logical thinking skills.

A nice way to lead into the problem would be to show the class the picture of the rabbits in the pen and simply ask them to describe what they see, wihtout saying anything more yourself. Pupils will mention the different colours and different kinds of ears, and many will notice that each rabbit is different from all the others. You can use this to introduce the fact that we only have these six different kinds of rabbit.


At this point, it would be good to use objects or symbols on the board to represent rabbits. You could print off pictures of each type of rabbit and stick them on the board, or alternatively, you could simply draw circles in the three different colours with lines to represent ears, pointing up or down. Whichever way you choose, start off by drawing just, for example, 1 brown floppy eared, 2 brown ordinary eared and 1 grey floppy eared rabbit. Ask the children to describe what they see now and begin to bring out some numerical comparisons. Some might say "there are the same number of floppy eared rabbits as ordinary eared rabbits" or "there are three times as many brown rabbits as grey rabbits". In this way, the children will become familiar with the language and will be more confident when tackling the problems.


As they are working on the two different pens in the problem (perhaps in pairs), you might want to have counters, coloured pens etc available for the children to use. You could stop the whole group at a convenient point to discuss how they are tackling the problem. Encourage trial and improvement strategies which involve trying out a small number of one type of rabbit and building up the other kinds of rabbits from the information given. Then, if that doesn't fit the information, trying one more of the first type of rabbit and so on. You could also invite pupils to share their methods of recording with each other - some may have devised effective short-hand symbols or letters for the rabbit types.

Pupils could set up another situation of their own and make statements that will lead to the unique situation. They could then challenge a friend to use the statements to find out the numbers of each type of rabbit.

You may prefer to create some slightly simpler challenges, for example:
The idea would be to encourage a trial and improvement approach, and for children to realise that the information is not necessarily useful in the order it is given!
The NRICH Project aims to enrich the mathematical experiences of all learners. To support this aim, members of the NRICH team work in a wide range of capacities, including providing professional development for teachers wishing to embed rich mathematical tasks into everyday classroom practice.