For Richer for Poorer

Charlie has moved between countries and the average income of both has increased. How can this be so?

What can you see? What do you notice? What questions can you ask?

We recieved two particularly full and clear solutions to this problem. Both submitters thought carefully about the precise mathematical meaning of the rules. The first solution was from Patrick, from Woodbridge School and the second from Phil at Garforth Community College. Both solvers correctly noticed that the 'start tile' axiom was confusing due to the linguistic meaning of start: could the start be found in the middle of a road? The point of confusion about the meaning of the 'start' could be clarified. 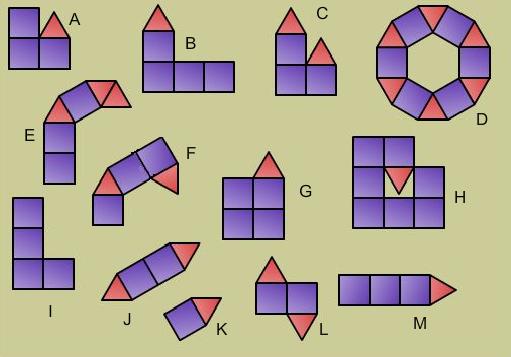 For a reminder, the roads are as in the picture above and the rules are as follows:

1. Each road must contain a 'start' tile which is a blue square aligned with its sides to the north, south, east and west.

2. Each road must contain an 'end' tile which is a red triangle. A point on this triangle opposite an attached edge is called the destination of the path.

3. Tiles in a road must be joined exactly along edges with no overlap

4. Triangular tiles must point due north or due south. F and M both have triangles which do not point north or south at all.

5. In a finished road, all tiles must be joined along an edge to exactly 1 or 2 other tiles.

Depending on the definition of Start Tile , C could obey the rules if the start tile does not have to be the beginning of the road, or it could not if the start of the road (from which all tiles can be reached without crossing one more than once) must be a square. L does the same.
D obeys the rules, as does E.

Phil from Garforth Community College gave a clear explanation as to which roads satisfied or broke each rule. He thought like a true mathematician, questioning all rules carefully. We were particularly pleased that he noted that 'touching corners' might count as an overlap; this would require proper clarification.

The following roads fit all five rules: A, B, E and H .

These roads break the rules as follows:

Rule1: It could be argued that L, D and C break this rule, because there appears to be no distinct start tile. It is ambiguous whether a distinct start is needed, which only connects to one other tile, or simply a tile which could be designated as the start .

Rule 2: Ibreaks this rule, by having no red triangles, although D does not appear to have a distinct destination, leading to a similar confusion as in rule one .

Rule 3: All the tiles seem to adhere to this law, although it could be argued that touching corners such as the squares in H count as an overlap .

Rule 4: However, the meaning of 'point' is ambiguous. It could mean that any vertex of a triangle should point north or south, or that the vertex opposite an attached tile must point north or south. If this were the case, then E and D would also break the rules .This is a good observation:

Rule 5: In G, there is one square attached to three tiles .


Phil continued to analyse some more of the struture of the problem:

Theoretically, there are in fact an infinite number of paths which break only one of the rules. This comes from a loophole found in rule number three:

The following road would comply to the munchkins'?? standards yes; this is the shortest road

None of the following, however, would:

There is a start, a destination, the triangles point due north and both tiles are only attached to one other. Those are only four of the possible paths which break rule three, but the triangle can be shifted by smaller and smaller amounts each time, leading to a possible infinite number of combinations in the paths. This probing of the rules to see how they can be failed shows real mathematical insight -- well done!