Maths in the Victorian Classroom 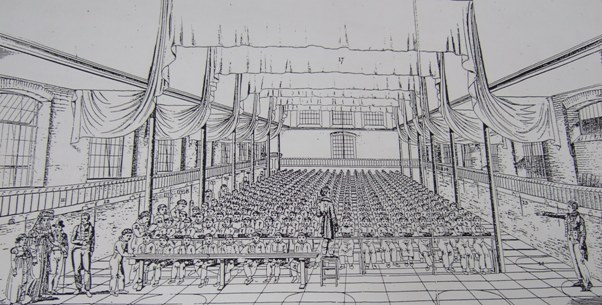 Learning about maths today can be an exciting, colourful and rewarding experience, particularly if you explore the NRICH website! A hundred and fifty years ago life was very different for the majority of children. Not everyone went to school, and those who were lucky enough to get an education had to learn things the hard way. We decided to find out what it would have been like to learn maths at school in the Victorian period. So, we went to visit a school where you can still see classrooms that were designed and built in the 19th century, and experience a day in the life of a Victorian child.

The British School in Hitchin first opened in 1810. It was opened by a local solicitor who believed that the best way to help the children of the poor was to give them an education. At the time this was quite a controversial point of view - many people thought that to educate poor people would give them ideas above their station and would be a complete waste of time. We take it for granted now, but in those days an education was a mark of status and self-improvement and something that people had to fight for.

The main classroom that survives today in Hitchin was built in 1837 - yes, there was just one classroom for 300 boys (girls were taught seperately in another part of the building). It wasn't even that big - about the size of an average assembly hall nowadays, so conditions were a little cramped. The picture at the top of this page shows a similar classroom at a school in London. There was only one teacher, so how did he manage to teach so many boys of different ages and abilities? The answer is, he didn't. Instead he would teach each lesson to about 30 of the brightest children in the school. Each of these pupils, known as "monitors", was then responsible for teaching a group of 10 other boys. The group would stand in a semi-circle around the monitor, facing one of the teaching boards that were hung around the walls of the room. 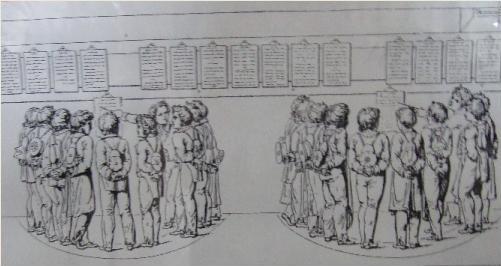 A lot of the maths they learned was basic arithmetic and calculations involving money, which in those days was all in pounds (£), shillings (s), pence (d) and farthings (1/4). Unlike today's simple system of 100 pennies in a pound, adding or subtracting sums of money involved a bit more thinking back then. First of all children would have to memorise the rules for how many pennies were in a shilling, how many shillings in a pound and so on. They did this by reciting them out loud over and over again. Here are the rules - read them aloud 10 times and see if you can remember them without looking:

After spending quite a lot of time learning this, they would move on to some addition problems. The problem would be written up on the board around the classroom, and in their groups the children would read it out loud several times. Here's an example of a typical addition sum:

It certainly makes you think about the process of addition when you're no longer dealing with tens, hundreds and units. Have a go before scrolling down to check your answer.......


The answer to this one is £8.10s.3d and 3 farthings. Not as easy as it looks, is it? Of course Victorian children weren't expected to be able to just work out sums like this without lots of practice. The monitors would show them how to solve it, and then make them repeat the same problem out loud over and over again until they had completely memorised it. Then they would return to their seats to write it down. They didn't use paper in those days because it was very expensive. Instead pupils wrote on pieces of slate, or in sand trays using sticks. Once they had copied down the question and written out the correct answer the monitor would check it and only then would they move on to the next question. Sounds tedious? It certainly was compared to the fun you can have with maths in school nowadays! 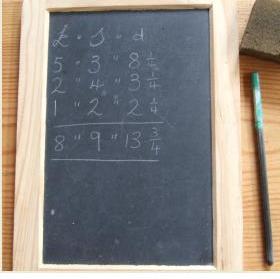 A typical slate showing a pupil's attempt at an addition problem. Can you spot the mistake?

School wasn't just boring and repetitive in the 19th century, it was strict as well. If you didn't behave yourself you were in big trouble. You might have to sit in a corner wearing a pointed dunce's hat if you gave a wrong answer, or sit with a wooden rod up your back if you were slouching. Worse still, if you misbehaved you could be beaten with a cane or hit across the knuckles with a ruler. On the plus side, children were rewarded for hard work and good behaviour with certificates and prizes such as toys that they couldn't have afforded themselves. Poor children lived in extremely harsh conditions, so a new ball or a hoop was a real treat worth working hard for in class.

The girls learned maths as well, but they also had to learn domestic skills. Some of these wouldn't have been thought of as mathematical back then but they actually involved some quite tricky sums. Girls were expected to learn to cook and to work out exactly how much sugar, flour, eggs etc were needed by calculating with weights and measures. They learned to make clothes by drawing, cutting and sewing elaborate patterns, and they had to know how to run a household on a very tight budget. Nobody would have called it maths at the time, but these were basic mathematical skills that were essential for survival (and are still quite handy for both girls and boys today).

Maths in Victorian schools was meant to prepare people for real life situations, usually involving money. There were no calculators in those days, and although children learned how to use an abacus, most calculations were done mentally or on paper. Here are some genuine examples of Victorian maths questions, why not have a go at them (answers are at the bottom of the page)? Don't forget the rules about pounds, shillings and pence.

1. A gentleman left his eldest daughter £1500 more than the youngest, and her fortune was 11 thousand pounds, 11 hundred pounds and £11; what is the eldest sister's fortune and how much did the father leave them in total? 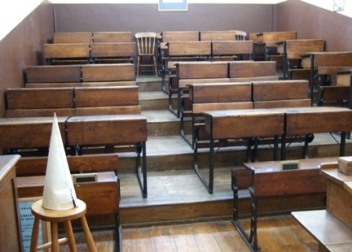 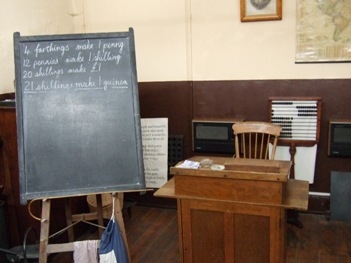 
These pictures show the smaller "galleried" classroom that was added to the school in Hitchin in 1853. Over 100 pupils were crammed into this room and you can see a dunce's hat at the front as well as the abacus behind the teacher's desk.


To found out more about the British Schools Museum in Hitchin, visit their website .