The squares of any 8 consecutive numbers can be arranged into two sets of four numbers with the same sum. True of false?

Minus One Two Three

Some good thinking from Berny at Gordonstoun School, and others, connecting the algebra to the shape and position of the quadratic graph (parabola) :

When we set a problem on the NRICH site there's often an insight we hope you'll discover as you work your way around the problem.

In Minus One Two Three the insight was to see that expressions a. b. and c. below are just three different ways to represent the same quadratic form.

b. is made from a., multiplying to 'remove the brackets', and c. is decided by looking at b.


Deciding the c. form is sometimes called 'completing the square', if you are not yet familiar with that, square $( x + 4 )$ to check that the three representations really do match.

It's, b, the second of those three forms, which helps most here because it reveals the axis of symmetry for the red graph below ( the blue graph is a simple x-squared parabola passing through the origin )

The '$+ 4$' in the expression works like a boost for the $x$ value and lets everything on the $x$-squared curve happen $4$ 'earlier' - that is to the left of the origin.

Subtracting $4$, after the 'squaring', has the effect of lowering all values, or points on the graph, by $4$.

So c. is like the $x$-squared parabola but shifted four left and four down. 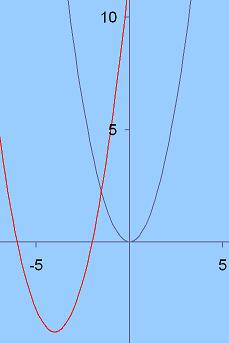 In a similar way with the other expressions :

More generally, you might like to think about whether every pair of linear brackets, like a. would produce a parabola-type ($x$-squared) curve, and similarly whether every expression like b. would have to be symmetric about some $x$ value.