This activity is about imagining a picture in your head. 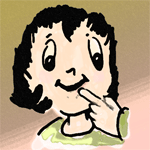 You will probably have to write some numbers down.
BUT
Try not to draw anything.
Here we go ...

Imagine a step pyramid.
Each layer is made from a number of stone cubes.
There is a square number of cubes in each layer, which increases for each layer (increasing from top to bottom).
The cubes are numbered starting from the top layer so that, looking from above, each new layer carries on counting starting from the North West corner. (When the end of a row is reached you start at the West end of the next row.)
There are equal steps on all four sides of the pyramid (in other words, each successive layer "sits" exactly in the middle of the layer beneath it).

We'll imagine a six-layered pyramid that uses 91 cubes in total.

What numbered cubes are vertically underneath (in a straight line):


the cube that is number 1?


the cube that is number 4?


the cube that is number 8?

Now imagine stepping up two layers at a time, starting at the middle cube on the South side, second layer up. Which numbered cubes would you step on to end at the top, if you stepped up in a straight line?

Starting at the South West Corner and stepping up one layer at a time on the corner steps, which numbered cubes would you step on?

What if a second pyramid was built, numbering the cubes as they built the pyramid, so the numbering would start from the bottom North West corner and starting the second row as before.
So number 1 at the bottom and the last cube number 91.


What numbered cubes are vertically underneath (in a straight line):


Is there a cube that has the same number in both pyramids?

What was the difference for you in doing the second pyramid compared with doing the first pyramid?

This problem requires pupils to visualise the described pyramid in order to answer the questions. Your class will also be using knowledge of square numbers to solve the problem.

It might be best to introduce this activity orally so that children do not have to read lots of text. You could jot down a few reminders on the board for them to refer to as they try each part of the problem. Before asking them to picture the cubes vertically above and below each other, you might like to ask pupils to tell you where particular numbered cubes are in the pyramid so that you can check everyone is imagining the same thing. You might suggest that at first they try to answer your questions without writing anything down, and talk about any difficulties this poses, but soon give them the opportunity to record the pyramid in whatever way they find most helpful. Share some of these representations with the whole group before going on to try the problem itself.

This sharing is a very valuable part of the visualisation process as it is a skill in itself not only to describe your own visualisation, but also to understand someone else's and compare it with you own.