This brief descriptive article is intended as light reading for the general reader. Here we shall explore the question in a very informal way. We shall discuss different sets of numbers, including quaternions and a brief mention of Clifford Algebras, starting with counting numbers and meeting new sets of numbers, each set containing within it the set of numbers discussed so far. Quaternions are explored in more detail in the NRICH problem Two and Four Dimensional Numbers
In order to understand why there are different sorts of numbers, and what they are, we need to consider how young people meet the familiar number systems and how we broaden our ideas of number as we learn more arithmetic. Many small children are proud of themselves when they can count to one hundred and a little later they have an experience of awe and wonder when they first appreciate that counting goes on for ever with no end. These children have a familiarity with counting and the natural numbers, even with the concept of infinity, before they meet a number system. Roughly speaking a number system is a set of entities that can be combined, according to agreed rules, by the operations of addition, subtraction, multiplication and division, always producing answers that are in the set.
Rules of Arithmetic

Once we have an operation which combines two numbers to give another number, can we undo that process? If we can add 7 what is the operation on the answer which restores it to the original number?

We can do arithmetic without knowing the mathematical language and nothing so far is beyond the experience of a small child learning to read a thermometer on a wintry day.

We think of any subtraction as simply the addition of two integers so subtraction is not essential to recording arithmetic operations. For example $9 - 13 = 9 + (-13) = -4$. The integer $-13$ is called the inverse of the $+13$ because $(+13) + (-13) = 0$. Every integer has an inverse such that the number added to its inverse gives zero. We are already working with the structure and using the rules which define the arithmetic involved in adding integers. This is an example of a mathematical structure called a group .

From the Natural Numbers to the Integers

Another way to explain the evolution of thinking that extends ideas of counting and addition is to say that if we want to be able to solve all equations of the form $a + x = b$, where $a$ and $b$ are given and we have to find $x$, then for all such equations to have solutions we need to work in the set of integers. For example $9 + x = 5$ had no solution within the set of counting numbers. 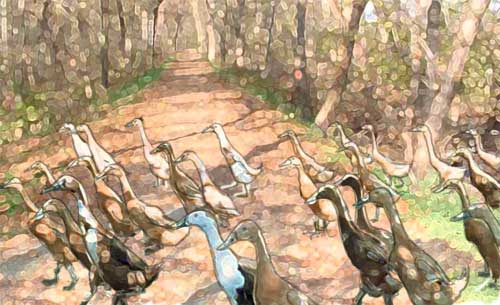 The rational and irrational numbers together make up the real numbers. Each real number corresponds to exactly one point on a line and all the points on that line are represented by real numbers. We call this line the real line . The real numbers are equivalent to one dimensional vectors and, together with addition and multiplication, form a field. We have now discussed two different examples of fields of numbers, the rationals and the reals.

In the field of real numbers we can solve the equation $x^2 = a$ only when $a$ is positive but not when $a$ is negative. Real numbers are good enough for many mathematical purposes but clearly they have limitations. It is necessary to recognise the existence of two dimensional numbers, the complex numbers, in order to solve all quadratic equations.

In 1799 Gauss proved the Fundamental Theorem of Algebra: every polynomial equation over the complex numbers has a full set of complex solutions. Then, and finally, complex numbers were completely accepted as 'proper' numbers. This theorem means that every quadratic equation has two solutions, every cubic has three and so on.

Think about taking a real number and finding its additive inverse, say $5$ and $-5$. To move from any real number to its additive inverse we must multiply by $-1$, or to think of it another way, we must move from the positive real axis to the negative real axis, a half turn about the origin so the point $(5, 0)$ moves to $(-5,0)$, that is the complex number $5+ [0\times i]$ moves to $-5+[0\times i]$. No obvious clue there as to the role of $i$ but let's probe a bit further and think more about rotations. Two quarter turns make a half turn so what happens when we rotate the plane by a quarter turn about the origin? The point $(5, 0)$ moves to $(0,5)$, that is the complex number $5 + [0\times i]$ moves to the complex number $0 + 5 i$ which appears to be equivalent to multiplying by $i$, that is $i(5 + [0\times i] ) = 0 + 5i$. (It is not necessary to write in $[0\times i]$ here but we do so to make clear how the mappings of the complex numbers correspond to the mappings of the points in the plane including the points on the real line which correspond to real numbers.)

All this works beautifully because $i^2 = -1$. This little complex number, corresponding to the point $(0,1)$, not only allows all polynomial equations to have solutions but gives a powerful tool for working with rotations. In the form $x+yi$ complex numbers can be added, subtracted, multiplied and divided according the the same rules as elementary arithmetic, that is the complex numbers form a field. We now have three fields of numbers, the complex numbers, the reals and the rationals.

Another glimpse of the beauty of complex numbers is seen in the formula $$e^{i\theta}=\cos \theta + i\sin \theta $$ linking geometry, trigonometry and analysis. This formula involves the important real number $e$ as well as the complex number $i$. Students usually meet this formula and use it in their last year in school if they are preparing to study mathematics, physics or engineering in higher education. In this formula the angle $\theta$ is given in radians and not in degrees but the conversion is a simple matter because $\pi$ radians is $180^o$. If we put $\theta = \pi$ we have the very beautiful result $$e^{i\pi} = \cos \pi + i\sin \pi$$ which connects the important numbers $e$, $i$, $\pi$ and -1 in the simple little formula $$e^{i\pi} = -1.$$ If we put $\theta = {\pi \over 2}$ we have $$e^{i{\pi \over 2}} = \cos {\pi \over 2} + i\sin {\pi \over 2} = i$$ which suggests that multiplying by $$e^{i\theta}=\cos \theta + i\sin \theta $$ might be equivalent to rotating the complex plane by an angle $\theta$ ( as this works for quarter turns and $i$) and this is indeed the case.

Three dimensional numbers do not exist

Quaternions, discovered by the Irish mathematician Sir William Rowan Hamilton in 1843, have all the properties of a field except that multiplication is not commutative. Moreover quaternions incorporate three dimensional vectors and much of vector algebra and provide simple equations for reflections and rotations in three dimensional space.

As applied mathematics and physics regularly deal with motion in space, quaternions are very useful. It is a quirk of history that this was not perhaps fully appreciated at first and vector algebra was invented as a tool to work with motion in 3 dimensional space and concentrate attention on only 3 dimensions. However a lot of the simplicity of the equations involving quaternions was lost as well as sight of the underlying reasons for defining scalar and vector multiplication in the way they are defined. Nowadays quaternions have come into their own again as an important tool frequently used in applied mathematics and theoretical physics. Quaternions are also now widely used in programming computer graphics because the quaternion algebra involved in transformations in 3 dimensions is so simple. What about higher dimensional numbers? Number theorists work with Clifford Algebras, named after William Clifford (1845-1879), which generalise complex numbers and quaternions to dimensions 2, 4, 8, 16... and higher dimensions (all powers of 2). Some of the properties of a field are lost, for example quaternions are not commutative under multiplication, but Clifford algebras are associative. Clifford algebras have important applications in a variety of areas including geometry and theoretical physics. Other generalisations are studied for which multiplication is not associative.

This 'big picture' discourse has ranged, without getting too technical, from kindergarten mathematics to the fringe of research into analysis and applications of number. There is a wealth of literature to take the reader further at every level and the links below may provide a useful start on such a journey of discovery.

Some Further Reading
NRICH Articles:
Small Groups
An Introduction to Mathematical Structure
What Are Complex Numbers?
An Introduction to Complex Numbers
Plus Articles:
Maths Goes To The Movies
Curious Quaternions
Uniquitous Quaternions
Other websites:
History of Numbers and Number Theory
Wikipedia on Quaternions
Wikipedia on Clifford Algebras
The NRICH Project aims to enrich the mathematical experiences of all learners. To support this aim, members of the NRICH team work in a wide range of capacities, including providing professional development for teachers wishing to embed rich mathematical tasks into everyday classroom practice.