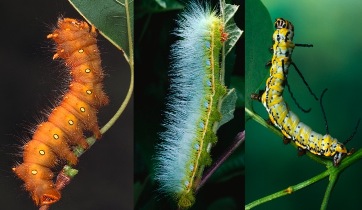 You can see their pale blue head, and their body bending at right angles so that each part is lying in a square.

There are two explorations to go with these caterpillars:

1. You could look carefully at the shapes of the caterpillars and let them turn in other ways. Here are a few to start you off:

When you've discovered many new ones, with the shapes - and therefore the numbers - all showing differently, you could compare them. What is the same and what is different? Can you explain why?
You could try to put the caterpillars in shapes that are not squares!

Do tell us about all the things you find out.

This investigation is likely to capture the attention of many children and you might discover that they find things to explore which had not occurred to you! It is also an enriching activity that has links both with spatial awareness, number awareness and number patterns. It could be used to broaden pupils' experiences of number relationships.

You could introduce this investigation by drawing a caterpillar on a grid, perhaps on the interactive whiteboard, to establish the context. Invite a child to draw a different caterpillar on another grid and then ask pairs to talk about what they notice.


This leads into the first activity so this could be pursued further by the group, or some might prefer to opt for the second activity. You will need to have some conversations about how they might record what they have found. Having squared paper available, or perhaps some templates of different sized grids, would be a good idea, but children might have their own suggestions.

What do you see?
Tell me about the numbers you've.
I like this shape of caterpiller you've made, tell me about it.

Alan Parr (who has contributed many fantastic ideas to NRICH), also sent the following suggestions for investigating the Caterpillars in other ways:

Here are some ideas to use if the pupils are new to the exploration of number patterns: 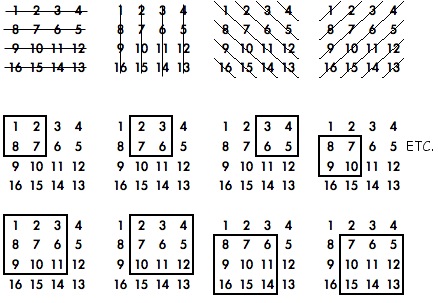 These show:
Adding horizontally, then vertically;
Adding in slanting lines - when you've done the two different sets, [North West to South East and then North East to South West] you can put them together in different ways;
Adding in squares and putting down the answer in a square. So, adding in a $2$ by $2$ square and performing all $9$ additions we would have:

There are lots of questions to be asked here, based on trying to explain the resulting totals.
Adding in $3$ by $3$ squares as above.