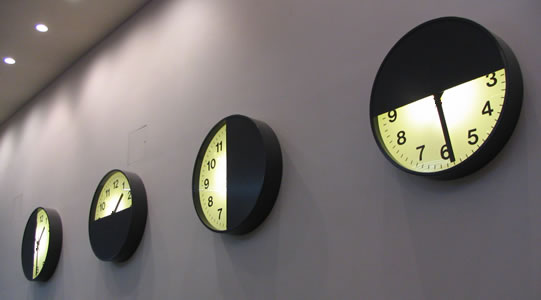 Here are the solutions sent in by Isaac from Long Bay Primary and from Nathan at South Island School:

If I hid one of the clocks would you still be able to tell the time?: Yes

Would it make a difference which clock I covered?: No

Would there be periods of the day when I could not work out the time if there were only three clocks and what would those periods be for different combinations of three clocks?: No

Actually, you can always work out the time from only three of these four clocks at ANY time of the day. This is because from clocks 1 and 3, you can see both sides of a clock that make a whole. The same goes for clocks 2 and 4. Therefore, no matter which clock you hide, you can still tell the time using two of the remaining three clocks.

Generalising: When, as in the pictures, you only have TWO clocks, then you can see 3/4 of the clock. The periods of the day when you wouldn't be sure of the time is when one or both of the hands of the clock is covered. Being able to tell the time with only two clocks happens when both the hour hand and the minute hand are visible.

In each of these pairs there is a quarter of the clock-face that is never seen by looking at either clock. So the hour hand is only visible for 9 hours in twelve, and in each of those hours the minute hand is not seen for a quarter of an hour.
The NRICH Project aims to enrich the mathematical experiences of all learners. To support this aim, members of the NRICH team work in a wide range of capacities, including providing professional development for teachers wishing to embed rich mathematical tasks into everyday classroom practice.