What Do Functions Do for Tiny X?

Looking at small values of functions. Motivating the existence of the Taylor expansion.

The equation a^x + b^x = 1 can be solved algebraically in special cases but in general it can only be solved by numerical methods.

Aleksander from Gdynia Bilingual High School No 3, Poland used the properties of the sine function to find a polynomial approximation.

As we know, polynomials are one of the most flexible functions and hence, can have very different shapes. They are probably the most flexible functions you can find, thus we can state a hypothesis that every function can be approximated by a polynomial of an appropriately high degree. Let's now consider sine, the functions that is very difficult to calculate and thus we usually need its approximation. In the beginning let's find coefficients in the following expression: $$\sin x \approx a + bx +cx^2 +dx^3.$$ Let's make a few observations:
(1) Sine is an odd function
(2) $\sin [0]=0$
(3) For sufficiently small $x$, $\sin x \approx x$.


Polynomials are odd only if coefficients of even powers of $x$ are equal to 0.


To get approximation of $\sin x$ using polynomials of higher degrees, we have to remember that coefficients of even powers should be equal to 0. For that reason the next degree of a polynomial that can be used here is the 5th.

Andrei from Romania used the Taylor series and drew graphs to show the polynomial approximations . 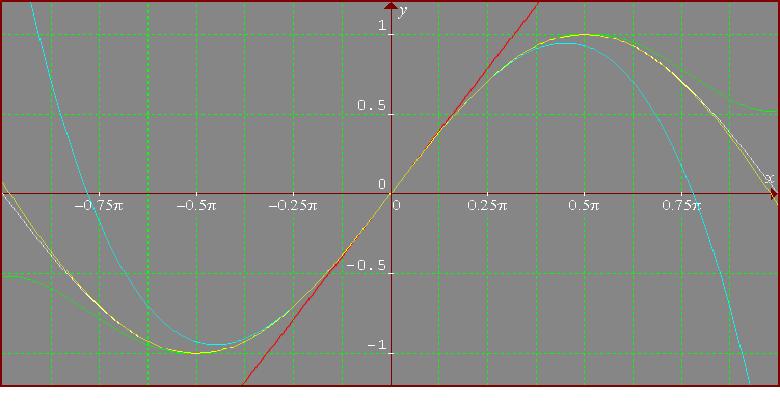 The function sin(x) is represented in white, the first order polynomial in red, the third in cyan, the fifth in green and the seventh in yellow. It can be observed that the accuracy is better and better. As the order of the polynomial increases, the accuracy increases.

It is remarkable that, using only up to the seventh order polynomial, I obtain a very good approximation of the function. Sin is a periodic function and so it is sufficient to work on the interval $[-\pi, \pi]$, and, observing that sin is an odd function the interval $[0, \pi]$ is enough. Around $\pi$, in fact I should use the expansion of the function around this value. This is equivalent to moving the y-axis $\pi$ to the right. 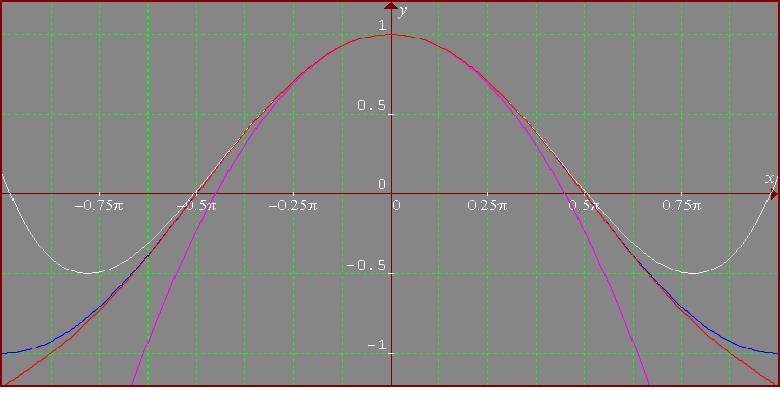 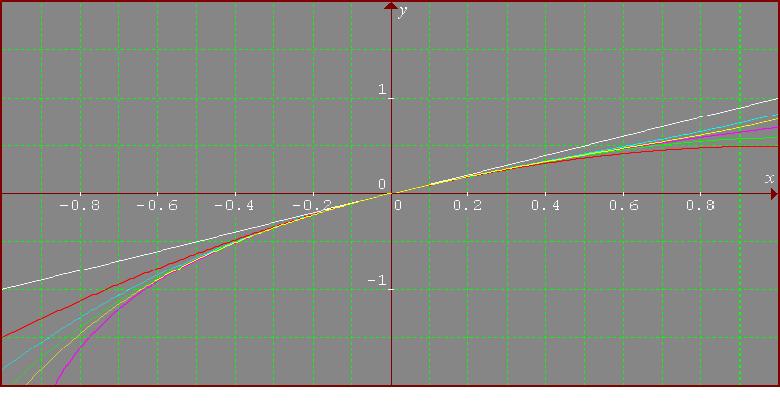 Here, the colours of the curves are as follows: violet for the function, white for the first order approximation, red for the second, cyan for the third, green for the fourth and yellow for the fifth. 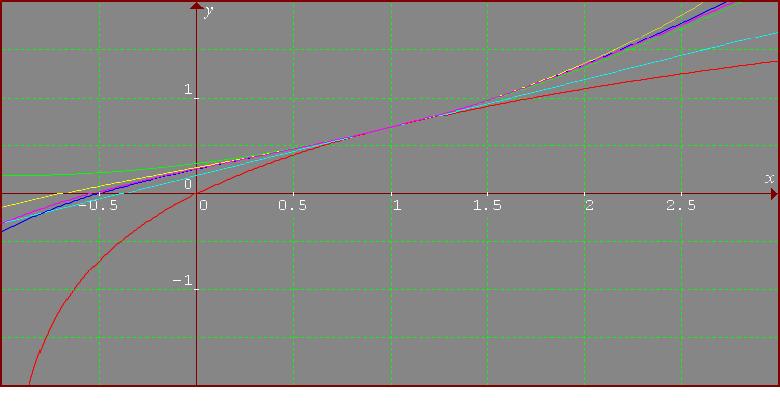 The colours are as follows: the function in red, the first order polynomial in cyan, the second order one in green, the third in yellow, the fourth in blue, and the fifth in violet.
The NRICH Project aims to enrich the mathematical experiences of all learners. To support this aim, members of the NRICH team work in a wide range of capacities, including providing professional development for teachers wishing to embed rich mathematical tasks into everyday classroom practice.