ABC is an equilateral triangle and P is a point in the interior of the triangle. We know that AP = 3cm and BP = 4cm. Prove that CP must be less than 10 cm.

Two circles of equal radius touch at P. One circle is fixed whilst the other moves, rolling without slipping, all the way round. How many times does the moving coin revolve before returning to P?

How Far Does it Move?

Experiment with the interactivity of "rolling" regular polygons, and explore how the different positions of the red dot affects the distance it travels at each stage.

One of my regular trips to Liverpool last summer took me to the Walker Art Gallery. A wonderful place with some beautiful pictures.

On my way out I stopped to browse in the small shop and discovered this toy for 50p. 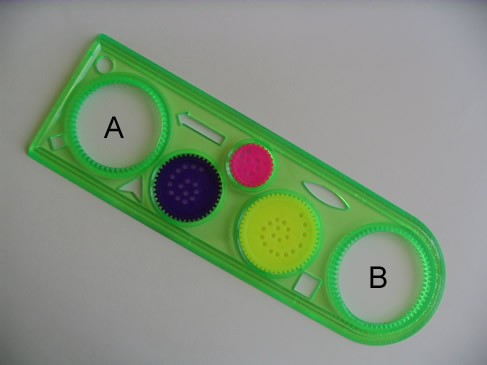 What a bargain and so many questions for you to think about.

Basically the toy has the three wheels with cogs along their circumference - the smallest is pink, the middle one blue and the largest yellow. It also has two circles (I have labelled them A and B in the picture). Circle A is smaller than circle B.


So here are some things for you to think about. It is important to remember that it is the argument you use to justify your decisions that is most important.

And a Wheel within a Wheel....

Can you work out which of the the three wheels with the pencil in which position make each of the following patterns:

And here are a few more patterns to discuss. They are made with any of the three wheels in one of the two circles with the pencil in any one of the holes.