What are the coordinates of this shape after it has been transformed in the ways described? Compare these with the original coordinates. What do you notice about the numbers?

A shape and space game for 2, 3 or 4 players. Be the last person to be able to place a pentomino piece on the playing board.


Here we have a kind of peg board. The holes go all the way through so the pegs may be seen from the top or underneath. 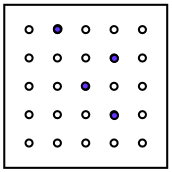 You'll see the 4 blue pegs.
Now the peg board is either:


Can you find out which movements could produce the four next views? 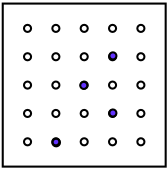 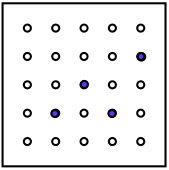 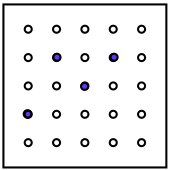 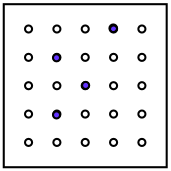 You could make some of your own and get your friends to see if they can find how you've moved it to make your next picture.
Try now to put 4 pegs in so that when you do a move with the board it still looks the same.


Now I've made a triangular board to do the same things.
Here's the starting view: 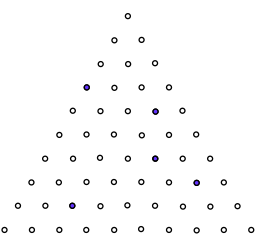 How has it been moved to show these views? 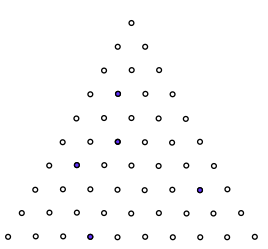 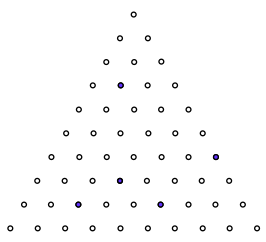 Hope you've had fun exploring these.
Can you think up ways of changing what I've done so that you can explore further?

This challenging activity offers a context in which learners can apply knowledge of transformations. Although best done practically for many pupils, some may draw on visualisation skills, at least to make hypotheses before confirming practically.  The triangular arrangement of dots helps to familiarise pupils with different angles.

This activity, as well as being done in ones or twos by the pupils, could be introduced by you challenging all the class at once. The first picture could be presented on screen, and you could ask the pupils what they would have to do with it to to see the next two pictures. You could provide pairs or small groups of pupils with an acetate grid and some dry-wipe pens to create each image for testing.

You may wish to download and print these sheets for pupils:
PegRotation.pdf
PegRotation2.pdf
(The first contains just the square grids, the second contains the triangular grids.)

Which peg/s might be helpful to focus on to begin with?
Have you tried flipping/rotating the original grid?

As suggested in the question itself, learners could be challenged to tweak the task slightly and pose their own problems.  For example, they could use more/fewer blue pegs; use a different grid etc. Also go to "Taking a Dice for a walk"

Plenty of dotty paper will be helpful and/or dotty grids on acetate sheets so that pupils can compare two patterns easily.
The NRICH Project aims to enrich the mathematical experiences of all learners. To support this aim, members of the NRICH team work in a wide range of capacities, including providing professional development for teachers wishing to embed rich mathematical tasks into everyday classroom practice.