There's a claim often made, that Maths and Music go together, which is great if you like both - but if, like some of us here, you know you're keen on Maths but haven't so far succeeded in mastering any instrument including a singing voice don't feel bad about it.

It seems very possible that music (and mathematics) has its own way of talking and it's easy to feel on the outside of that conversation. The encouraging thing is that mathematics can help us understand music, and maybe the other way round too.

There are plenty of interesting questions to think about. For example, why are particular sounds (notes) thought to be good together?

This is the first of three problems based around this idea (the other two are Pythagoras' Comma and Equal Temperament ): 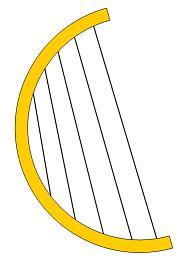 The Greeks, Pythagoreans especially, were interested in the notes made by plucking a collection of strings of different lengths (I'm guessing that the strings all had the same tension - maybe by hanging equal weights, beyond the section being tested).

The Pythagoreans noticed that nice simple ratios of string length made nice sounds together. For example a length with a half length sounded good, and lengths in a ratio of three to two sounded good also. It didn't seem to matter what the lengths were, so long as there was a nice simple ratio between them.


Now making music on two strings is a bit limited, so what they tried to find was a collection of lengths that would all sound good together. For convenience, no length would be more than double the shortest length. They settled on a six point scale (a set of agreeable notes). We'll call the longest length Note 1, and make that length our unit. The shortest length (half a unit) we'll call Note 6.

The length which makes a ratio of two to three with the length for Note 1 turned out to be the fourth note in their scale.