I am told that in the United States, where perhaps some of you might live or might have been, there are some cities and towns where the streets are arranged in very straight lines and cross each other at right angles. There are many mathematics problems and challenges which use this idea and today we are going to think about having a street party or street parade or festival. 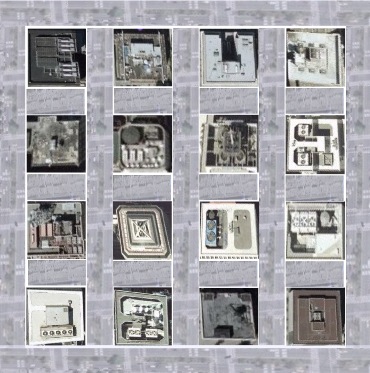 Let's imagine that there is a small town made up of 16 blocks of flats, so a view from above might look a bit like this as a grid or picture:

The spaces in between the blocks are the roads running North/South and East/West.

In this town, there are going to be two different parties on the same day which they want to keep separate. So they decide that they will put a fence down the middle of some roads to divide the town up into two equal parts. Because there is 16 block of buildings altogether we'll have to have 8 blocks in each half. Each of the two 8 blocks needs to be kept together with no block being separated from the rest of that group. So here are two examples that work but the third one does not as it separates the 16 into 3 (not 2) areas.

Well, you can probably guess that the challenge is to find as many routes as you can for the fence to go so that the town is divided up into to halves, each with 8 blocks of course!

Find some good interesting ways of recording the different fence-routes you find.

When you've done a few there may be some things that you want to say about how you are finding the different routes and you may be able to prove that you've found them all! It's good to write such ideas down and when you send in your results make sure that you include the writing. [Don't worry about wonderful sentences or spelling!]

It's probably time to ask the usual question:- "I wonder what would happen if ...?''

a) One child, Michael, recently suggested that it would be interesting to find out what would happen if there was a road blockage somewhere which meant you could not lay a fence down that bit of the road. It leads to some interesting thoughts and some trial routes.

b) I could also suggest, "What would happen if the roads were laid out in triangular arrangements?''


c) A very obvious question would be; "I wonder what would happen if there were more blocks of houses in the town so that the grid was 6 by 4, maybe, or a bigger square that would be 6 by 6?''

This is a good activity for getting good language flowing when encouraging children to explain their thinking. Encouraging their curiosity may lead them to lots of further ideas of which there are many possibilities. See the note at the bottom about the whole aspect of curiosity.

It is probably best to start with the pupils sitting round in a circle with some blocks in the middle that represent the blocks of flats. Then, introduce the challenge and get some ideas, showing them physically where the fence could go with string or ribbon.


Then the pupils can have time for exploring the ideas on their own or in small groups.

How did you get this idea?
Are any of yours the same as any others?
How do you make sure that you have done the halving of the 16 blocks?

As suggested in the problem, some children will enjoy looking at other shapes and extending the number of blocks in either a square or rectangular shape.

Some blocks or something else for pupils to use individually to represent the blocks of flats will be useful.

You may be interested in the following talks given by Professor Susan Engels, which focus on encouraging curiosity and are available on YouTube:
The Rise and Fall of Curiosity - the extract from 23.50 to 37.15 on adult encouragement and teacher behaviour is particularly worth viewing
The Hungry Mind: The Origins of Curiosity - the extract from 8.22 to 12.29 on children asking questions is especially useful.
The NRICH Project aims to enrich the mathematical experiences of all learners. To support this aim, members of the NRICH team work in a wide range of capacities, including providing professional development for teachers wishing to embed rich mathematical tasks into everyday classroom practice.