At the corner of the cube circular arcs are drawn and the area enclosed shaded. What fraction of the surface area of the cube is shaded? Try working out the answer without recourse to pencil and paper.

Which of the following cubes can be made from these nets?

Peeling the Apple or the Cone That Lost Its Head

Suzi from Perth had some good answers and excellent reasoning

Question : If this sector had a radius of 10 units what would the area be?

Question : If the sector is made into a cone by closing up the gap, what will be the base radius for that cone?

I then realised that it isn't actually necessary to calculate these lengths.

Question : If the cone now suffers a horizontal cut which removes its top, reducing its height by half, how much curved surface area remains?

Think of it like this :The original whole sector now has its centre missing.

The original and the removed sector are similar shapes with a line ratio of 1:2

So the area of the original sector must be four times the area of the removed sector (that's just squaring the line ratio) which means that the curved surface area of the lower remaining part of the cone is $\frac{3}{4}$ of the sector already calculated.

Dean from Cheadle & Marple College used reasoning like this to get a general formula for the area of a whole cone's curved surface :

Starting with a cone whose base radius is r and slope length is s. The curved surface is a sector from a circle with radius s.

So the fraction is r/s ,the whole area was $\pi$ $s^2$ and that simplifies to $\pi$sr for a cone's surface area not including the base.

Dean then produced a general formula for the area of a frustum's curved surface.

R and r are the radii top and bottom for the frustum and s is the slope length. 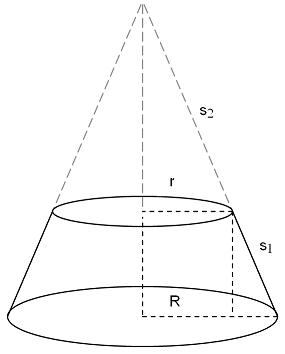 This involves some fiddling with the algebra but it's a nice result when you have done it.

What's needed is the difference in surface area between the two cones.

From the diagram you can see that a length $s_2$ will be involved which isn't very convenient because $s_2$ isn't a length you can measure somewhere on the frustum.

However if you notice the similar triangles present in the diagram you can find a connection between $s_1$, $s_2$, r and R

Next Dean explained that when the apple (sphere) is approximated to a stack of frustums (he used five) you can find all the lengths you need so that you can use that formula for the area of the curved surface on each frustum in turn, then for m a total. 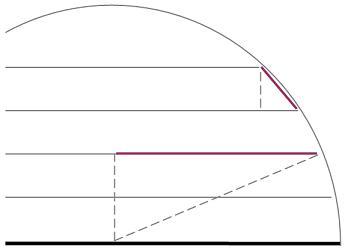 If you know how thick you've chosen the frustums to be you know the height.

The radius of the sphere you know and so applying Pythagoras' Theorem it is possible to find any radii lengths required.

Using Pythagoras also to find the slope lengths each time by using the thickness of the frustum and the difference between the top and bottom radii.

Here's part of Dean's spreadsheet and his comment on the result.

Thus the amount of peel of an apple of diameter 8cm is 197.899 (3sf) after doubling the hemisphere result from the sheet.

If 50 frustums are used the percentage error drops to 0.02%.

Which leaves us pleasantly curious about that formula Dean found which calculates the surface area for a sphere.

Continuing that line of thinking. If I know the volume for a sphere of unit radius I can say that the volume for a sphere of radius r would be $r^3$ times as much. That tells me what type of formula to expect now perhaps I can use that spreadsheet technique to find the volume of a sphere with unit radius. I wonder if it's a nice number of $\pi$ like the surface area?
The NRICH Project aims to enrich the mathematical experiences of all learners. To support this aim, members of the NRICH team work in a wide range of capacities, including providing professional development for teachers wishing to embed rich mathematical tasks into everyday classroom practice.