You sent in a range of different ways of solving this problem, but there were some common themes. Nina wrote:

To cover the camel with the tiles I first filled in all the obvious positions with the tiles. Some places on the camel, like the nose, all had only one tile configuration possible to fill it in properly and leave joined blocks remaining for another tile. Then, all the pieces kind of fit together like a puzzle and all you had to do was rotate them around and put them in the obvious positions.

Jazzy described how she filled the camel in:

I started with the feet and I fitted the two different pieces in after I rotated both of them.
Then I used the piece on the right to fill in the head and placed a rotated left piece beneath the head piece.
On the far right of the hump I used a left piece and fitted another left piece on the very far right beneath the hump piece.
Then I rotated three right pieces and placed them one on top of the other over the foot on the left until it filled the rest of the hump.
Finally I used one of the pieces on the left to fill in the last gap.

Sophie sent us a picture of her completed camel which is filled in a different way compared with Nina's: 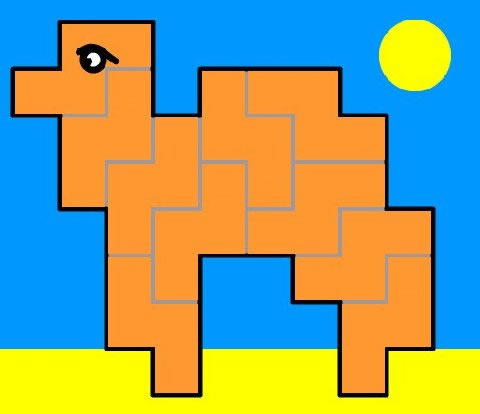 Well done all of you.