The Basic Rules of "Intersection Sudoku"

Like the conventional Sudoku, this Sudoku variant consists of a grid of nine rows and nine columns subdivided into nine 3x3 subgrids. Like the Sudoku Classic, it has two basic rules:
The puzzle can be solved with the help of small digits in the top parts of certain squares. The small digits stand for the numbers in the squares horizontally and vertically adjacent to the square that contains the set of small digits. The number of small digits in each set can range from a minimum of 2 (in a corner of the puzzle) to a maximum of 4 (in any square beyond the edge of the puzzle). 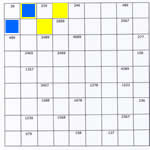