It is interesting to see the different ideas you had about this task.

- I estimate the man is 10 cm tall.
- I think that our small school books are twice as tall than the man.
- An eraser is half as tall as the man.
- The mug is approximately 10 cm.

Chloe and Candace from Ngatea Primary in New Zealand sent in their detailed explanation:

We used a ruler to measure him and he is 4 cm on the picture. We looked at stuff that was two times taller and smaller than the man around our class and outside: To find out how tall Little Man was if he was real, we got five different cups in the staffroom. We got five cups because we found five different sized mugs. We lined them up in order and took away the two tallest cups and the two smallest cups to find the average. The average was 10cm.
We measured a coffee cup it was 10cm.
If he is 10 cm tall and he is eight times taller than his mug, then his mug is 1$\frac{1}{4}$cm.

We looked at the size of the large mug and sized it to an object in my dad's office, which was a stationery holder.
We then looked at the little mug, this was approximately a thimble size. We estimated that there were 10 layers of small cups, each layer containing 20 cups, so the calculation was 20 x10 = 200 cups, but there would also be gaps in between of about a quarter of a cup = 50 more
So, the answer is 250 cups

Bryan from Maadi British International School in Egypt wrote by hand and sent in a picture : 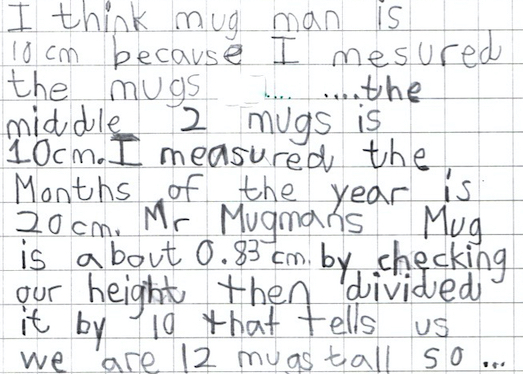 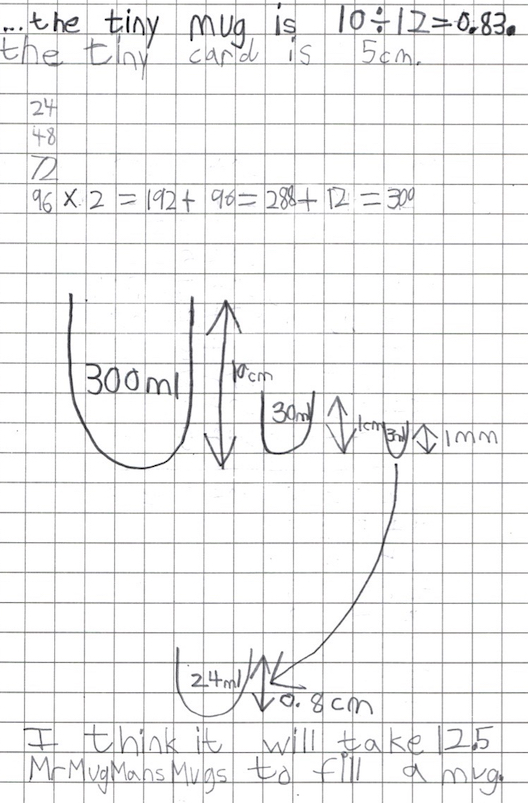 Matias from Cheltenham Elementary in the United States said:

Alara from FMV Erenkoy Primary School sent us a very full solution to this problem:

Estimation of how tall he is : - It is not possible to say an exact number or measurement for his height. There could only be some estimations. However, I can make an estimation using the ratio of the man's height to the mug's height.

How many "Man Mugs" of tea might fill one of my mug? There is a way to answer this question, if we take into considerationthe "ratio principles". Above, I identified that I'm 15 times as tall as my mug. So, let's assume the Little Man is as tall as my mug, so he is 10 cm tall. If we consider the same ratio between the Little Man and his mug, the Man Mug is 15 times smaller than him. 15 "Man Mugs" of tea might fill my mug.

Sam from Farndon Primary School and Harri from Pilgrim's School also estimated similar heights for the Man, although Sam thought that 79 "Man Mugs" of tea would fill one of our mugs.

Thank you for all these solutions.  Whose do you agree with, and why?
The NRICH Project aims to enrich the mathematical experiences of all learners. To support this aim, members of the NRICH team work in a wide range of capacities, including providing professional development for teachers wishing to embed rich mathematical tasks into everyday classroom practice.