The Man is much smaller than us. Can you use the picture of him next to a mug to estimate his height and how much tea he drinks? 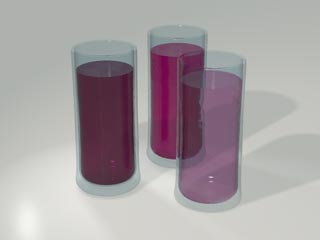 Lizzie's Dad is making some blackcurrant squash for Lizzie and her friends.

Can you decide which of these drinks, when mixed, will be the blackcurrantiest? (In other words, which one will have the strongest blackcurrant taste.)

Order the drinks from the blackcurrantiest to the one which would have the least blackcurrant flavour.
Can you explain why you have put them in that order?

The pictorial aspect to this problem makes the concept of proportion easier to grasp. Moreover, this is a good context for encouraging children to explain their answers fully.

An appealing way to introduce this problem might be to make up a glass of fruit drink with the children, deliberately using one measure of water to one measure of concentrate. Invite the children to suggest what you would need to change in order to make the drink taste more or less 'blackcurranty'. Make sure the group realises that either the amount of blackcurrant or the amount of water could be altered. In this practical context, you could compare the colour of the drinks too as a check.


From the practical, move on to introduce the class to the rectangle representation. Starting with one rectangle of blackcurrant and one of water, you could ask how the drink could be made less/more blackcurranty. Listen out for learners who justify their solution with reference to proportion. Some might talk about having more or fewer blackcurrant rectangles with the same number of water rectangles. Some might use fractions to describe the proportion, for example that one part blackcurrant with two parts water means that the proportion of blackcurrant is $\frac{1}{3}$. You could use this problem as a way of introducing this kind of notation.


Once the class has worked on the problem itself in pairs, you could try out their ideas practically using fruit drink.

Looking at these two drinks, which has most blackcurrant flavour?
How do you know?

Some children could be challenged to draw rectangles which represent other drinks according to certain criteria. For example, can they draw drinks that would be placed between each of the four children's drinks in the order of strength?

Give children the opportunity to talk to a partner about this activity so that they are not worried about using precise vocabulary at first. Describing the proportion of blackcurrant in each drink in terms of a fraction will help the comparisons.