Pick two rods of different colours. Given an unlimited supply of rods of each of the two colours, how can we work out what fraction the shorter rod is of the longer one?

An environment which simulates working with Cuisenaire rods.


This is a game for two players. You need one set of ten Cuisenaire rods between you, like this: 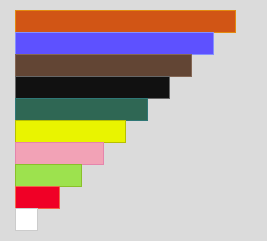 Alternatively, you could use the interactivity below.


This game is called Trains. A train is made by putting rods end to end.

The aim of the game is to be the person who places the last rod to complete a train of a particular length.
If one player puts down a rod that makes the train longer than the chosen length, then the other player wins.

Do you think it is better to go first or second?  Why?
Tell us about any useful strategies (ways of playing or ways of winning) that you have developed.

This game is an accessible context in which learners can practise addition and subtraction, but crucially it encourages strategic thinking too.

If your children are not already familiar with Cuisenaire rods, it is essential to give them time to 'play' with the rods before having a go at this activity.

If you have another adult in your classroom, you could explain to the class that the two of you are going to play a game, without talking, and that you'd like everyone to watch. Say to learners that, as they watch, you'd like them to think about what they notice and whether they have any questions. (If you don't have an adult, you could brief one of the children beforehand so they know how to play.) Begin to play the game, perhaps so that you both have a couple of moves each and then invite the class to talk to a partner.  As a whole group, share comments and queries, so that the rules of the game are established. (You may like to play a few more moves in silence to help clarify anything that has come up initially.)

Set children off in pairs, or threes/fours so that one pair plays against another, either using real Cuisenaire rods or using the interactivity on a tablet or computer. Give them chance to play several times so that they begin to get a 'feel' for the game, then specifically say that you would like them to consider good ways of winning the game as they continue to play. It might be appropriate for you to suggest that everyone has the same length final train to start with to enable initial comparisons to be made more easily. Subsequently, children could move on to wider exploration that might include different length trains.

In the plenary, you could hear about some strategies that different groups have developed, and perhaps try them out using the interactivity.  Do they get a sense of whether it is better to go first or second?  What evidence do they have to support their view?

Which rod will you place now? Why?
Can you win this move?  How do you know?
What do you think your opponent will do next if you place that rod?

Playing with a partner against another person, or another pair, provides a great opportunity for children to discuss their next move and offers support to build mathematical confidence and problem-solving skills.

You could ask learners to begin to generalise the game. How does the length of the final train make a difference to the strategy?