Year 5's from Heathlands Primary Academy sent in the following:-
We found out that we needed to place the numbers so that even numbers were connected to odd numbers in order to have an odd difference. This meant we could mix the numbers up and find multiple ways of arranging the numbers in the grid.
EG:
5    4    7

We then tried the extension task of trying to arrange the numbers so that the difference between the connected numbers was always even. This was harder because we found that we either had to match even with even or odd with odd. We didn't have enough even or odd numbers to make the grid. We couldn't connect even and odd numbers as that would always leave an odd difference. We could find ways to complete this using our own numbers between 0-20 - either by using all odd numbers or all even numbers.

The Maths Club from St Peters Catholic Primary school sent in the following:

It is easy to make all the differences odd - by using consecutive numbers forwards and backwards. We need to have at least one odd number in each row or column. We could not find a solution where all the differences were even, we think you would need one more odd or even number to fullfill that criteria, or if we could use one of the numbers twice.

From The United World College of South East Asia, East Campus Singapore we had solutions from Yusuke, Daisy, Reuben, Taylor, Adam, Hayley, Hana, Clara, Louis and Ella. There is not enough space for all of them, but this anwser typifies their solutions:
Our answer is:

Alice and Cameron's picture was:- 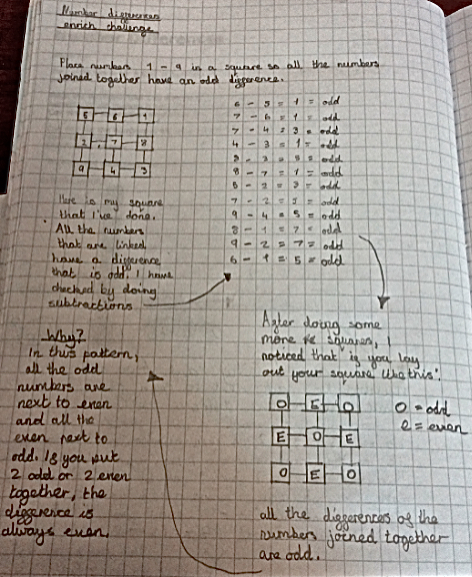 We discovered that if you use alternating odd and even numbers, the difference will be odd each time; having 1 in the middle square and then even numbers joining it will help with this.  Some of us used what we knew would go together (eg: 1, 2 and 5) and then trial and improvement to find the others.  We have attached photographs of 2 of our solutions.  We found no possible way of arranging the numbers so that the difference between joining numbers is even.

Thank you for all these submissions so many from two schools! I was pleased to see some generalisations and a collection of different solutions.
The NRICH Project aims to enrich the mathematical experiences of all learners. To support this aim, members of the NRICH team work in a wide range of capacities, including providing professional development for teachers wishing to embed rich mathematical tasks into everyday classroom practice.