You might like to try A Ring of Numbers and More Rings of Numbers before this problem.

Place the numbers from 1 to 9 in the squares below so that the difference between joined squares is odd. (You must use each of the numbers once.) 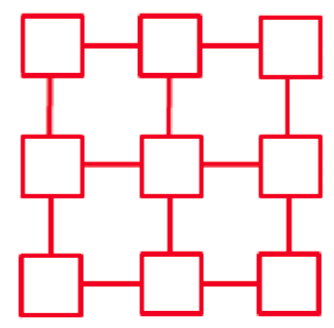 Can you find some other ways to do this? Explain how you do this.

Can you put the numbers in the squares so that the difference between joined squares is even?
Explain your answer.

What general statements can you make about odd and even numbers?


This problem is based on an idea taken from "Apex Maths Pupils' Book 2" by Ann Montague-Smith and Paul Harrison, published in 2003 by Cambridge University Press.

This problem encourages pupils to form early stages of proof by using their knowledge of odd and even numbers to construct mathematical arguments. It is a good context for generalisations.

Ideally, this activity should follow on from Ring A Ring of Numbers and More Numbers in the Ring so that minimal introduction will be needed.  However, if learners have not worked on the previous two tasks, you could show them the grid on the interactive whiteboard and write in numbers (in whatever way you like) and ask them to talk to a neighbour about what they see.  Sharing children's observations is likely to bring up odd and even numbers so that you can offer the challenge as it is written.

Give pairs time to work on the activity and draw the whole group together when appropriate to share any insights.  It may be useful for children to have a sheet with blank grids in order to try out their ideas.  Digit cards would also be handy.

You might like to invite children to find more than one way of arranging the digits for odd differences.  When it comes to the challenge of arranging the digits so that the difference between joined numbers is even, look out for those children who have a hunch it is impossible.  Encourage them to articulate why they think it cannot be solved.  You may find that a whole-group discussion is a fruitful way of coming to a good explanation.

What have you tried so far?
Are there any other ways to do it?
How do you know this is impossible?  Perhaps we just haven't found the one way that works?

You can assess children's understanding of the situation by giving them a new set of numbers to arrange.  For example, what would happen with 2, 3, 4, 5, 6, 7, 8, 9 and 10?  Are there any sets of numbers that would make both parts of the problem possible?  This will encourage them to generalise the situation beyond numbers 1 to 9.
Alternatively, you may like to probe children's understanding of the way odd and even numbers behave.  How do they know that two odd numbers will always have an even difference?  Can they convince you that it will always be the case?  They may well be able to create pictures that form a proof.

Many children will find it beneficial to work on Ring A Ring of Numbers and More Numbers in the Ring before tackling this problem.
The NRICH Project aims to enrich the mathematical experiences of all learners. To support this aim, members of the NRICH team work in a wide range of capacities, including providing professional development for teachers wishing to embed rich mathematical tasks into everyday classroom practice.