More Numbers in the Ring

More Numbers in the Ring 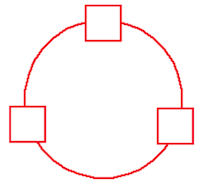 Before doing this problem, it would be a good idea to look at Ring a Ring of Numbers.

Change the ring so that there are only three squares.
Can you place three different numbers in them so that their differences are odd?
Can you make the differences even?
What do you notice about the sum of each pair in each case?

Try with different numbers of squares around the ring.
What happens with 5 squares? 6 squares?
What do you notice?

This problem is based on an idea taken from "Apex Maths Pupils' Book 2" by Ann Montague-Smith and Paul Harrison, published in 2003 by Cambridge University Press.

This problem builds on Ring a Ring of Numbers. It encourages children to start from different examples and then begin to draw some more general conclusions based on their understanding of odd and even numbers.