These drawings were found in La Pileta cave in Spain and could be up to $25 000$ years old.
What do you think these drawings represent?

Could they be about counting things?
What might 'stone-age' people count?

You could try and make up your own way of recording counting. 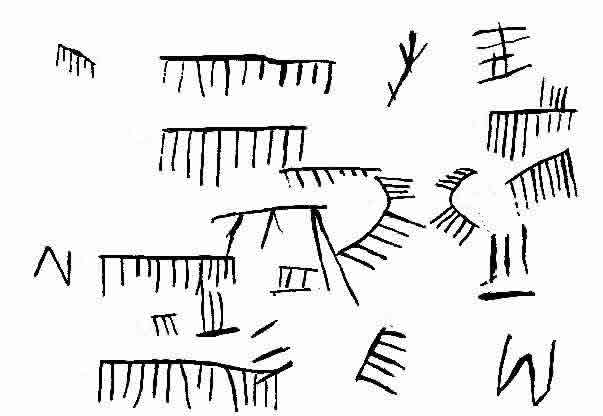 The lovely thing about this problem is that it does not have a 'right' answer as such and therefore it is a great context in which children can be creative and uninhibited. It is a fantastic opportunity for you to encourage learners to justify their hypotheses.

Project the picture on the screen for the whole group to see. Try to do this in such a way as to obscure any text so that there are no clues as to the meaning of the images. Without saying anything else at all, invite pairs of children to talk about what they think the picture may show. You could give each pair this sheet, which has a copy of the picture on it.


Share learners' ideas and, depending on what they say, focus on, or steer them towards, the idea of counting and representing numbers. Once this has been established, you can tell them where the symbols were found and encourage them to work in their pairs to come up with some more detailed explanations of the drawings. Children could annotate the sheet to record their thinking.


In the plenary, discuss pairs' interpretations of the pictures. The important thing is to encourage children to justify their thinking. You may find that some pairs have different ideas about the same symbol which may provoke a healthy argument! The aim would be to try and come up with suggestions for each symbol that don't contradict each other. You could then challenge children to record other numbers in the same way, for example on mini whiteboards.

Do you think the length of the lines is important?
Why do you think some of the drawings have curved lines?
What are the similarities and differences between the drawings?
How might you write other numbers?

Children could create their own way of representing numbers and/or they could find out about the La Pileta cave.

Some learners may find this task a little overwhelming because there isn't a 'right' answer. They may well need frequent verbal reassurance.