There are to be 6 homes built on a new development site. They could be semi-detached, detached or terraced houses. How many different combinations of these can you find?


You will need a double-six set of dominoes for this problem (a standard set of dominoes) but without the seven doubles (double one, double two etc). That is twenty-one domino pieces in all.

Can you arrange fifteen of the pieces round a track like this so that all the touching domino pieces add to $6$ and the ends join up? 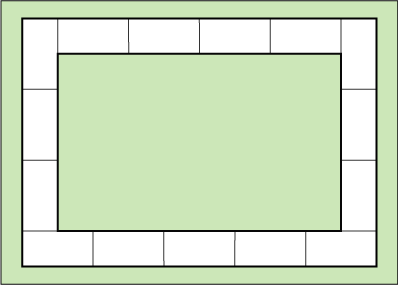 You will have six pieces left over.

Using the same twenty-one pieces, can you now make all the joins add to $7$? Which six pieces will you have to leave out?

Can you now make all the joins add to $5$ using the twenty-one pieces? Which six pieces will you have to leave out now?

You may find our Dominoes Environment useful for working on this problem.

This problem is useful for providing an interesting way of practising simple addition and subtraction. It can also be used to learn more about the rules for adding odd and even numbers. The problem requires a trial and improvement approach, and it is worthwile encouraging learners to articulate their method, so that it can be compared with someone else's.

You could start by joining together various pairs of dominoes so that the touching ends make a total of six. If you display several pairs on the board at the same time, you could ask children to talk about what they notice and this will make a nice lead into the problem itself. (Using the Dominoes Environment for this purpose may be useful.) Depending on their experience of using dominoes, you may need to give the group time to handle a full set of dominoes (one between two) first of all, before asking them to talk about how it is made up. You can then introduce the language of 'doubles' and pairs can remove the doubles from their own set.


After this, the children could work on the problem with their partner so that they are able to talk through their ideas. These sheets have a board with spaces for the fifteen domino pieces. The second page has the twenty-one pieces from the reduced set. If you want to use the board with a real set in which the pieces are a different size from the one given, you may be able to use a photocopier that can enlarge or reduce to change the size of the board to fit.


At the end of the lesson an interesting discussion could arise about which six pieces were left at the end of each activity and why this was so. You may also choose to focus on asking the children what they notice about adding odd and even numbers.

Children who find this problem straightforward could use a full set of dominoes and, following the same rules, try to make them join up.

It might be helpful for children to make a pictorial list of the dots on the dominoes that make six. You might find Domino Sorting useful as an alternative.