Straight lines are drawn from each corner of a square to the mid points of the opposite sides. Express the area of the octagon that is formed at the centre as a fraction of the area of the square.

Find the ratio of the outer shaded area to the inner area for a six pointed star and an eight pointed star. 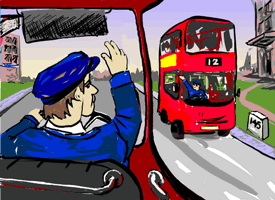 There were a number of excellent solutions to this problem which revealed three basically different approaches that I think are all worth sharing. James of Audenshaw School offered the following solution and commentary, which reflects the largest proportion of your answers. I like it very much because he explains his journey very well.

Derek adopted an approach based on a graphical solution and using similar triangles. I have included his graph, for interest, below. I used a graphical approach to solve this problem the first time I met it - and I felt that my solution was quite a neat one.

The last solution, and easily the most elegant, was presented by Ian and Charlie of the William Lovell School. I have added a little to their solution for clarity but it is simple and uses no algebra - quite a surprise and very, very nice as it makes excellent use of proportionality.

What a lovely problem.

We can establish from this a couple of inequalities and I was tempted to try this but decided it would be a pointless waste of time though linear programming can be fun.

The negative sign for $y$ has happened because James assumed the second bus was the fastest when it was actually the first bus.

Now all that remains is to identify which town is $x$ and which is $x + y$.
For reasons I have already explained Bus 1 was the faster bus and we are told in the problem definition that this bus left from Shipton and hence the slower from Veston.
In this solution Bus 1 left from $x$. Therefore $x$ is Shipton and $x + y$ is Veston. So the milestone at Shipton is $103$ miles and the one at Veston $229$ miles.

Here is the diagram Derek used for his solution. Although his final answer was wrong, the use of similar triangles can result in a reasonably elegant solution. 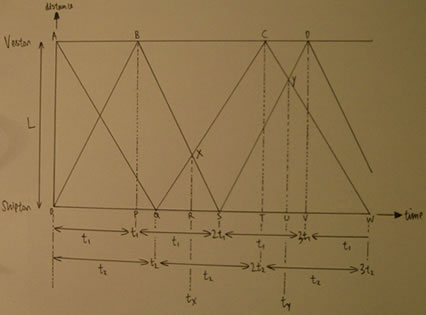 Finally Ian's and Charlie's solution, I have included a diagram of the buses' journeys and made some minor modifications to the text.

So first, divide the distance between the two towns into nine equal parts.