What might the next two dominoes be in each of these sequences?

Can you explain why you chose those two dominoes? 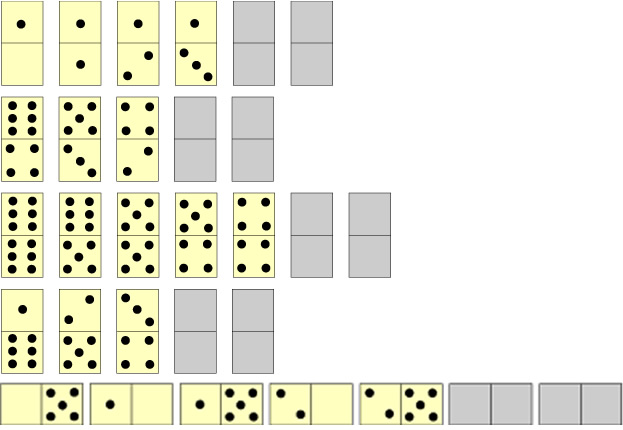 This problem introduces sequences in a simple way using a familiar resource. The sequences become increasingly complex so that there is also a challenge for learners.

The children should be familiar with dominoes through free-play and domino games before attempting more formal tasks such as pattern building.


Look at the first sequence together, perhaps using giant dominoes on the floor, or some on the interactive whiteboard (you might find our Dominoes Environment useful). Ask children to talk in pairs about what they notice and then share ideas with the whole group. Then invite them to suggest how the pattern could be continued, focusing on their explanations and justifications.


Once the learners have tried this first one together, they should be able to work in their pairs on the rest of the problem. They might find this sheet of the problem useful.

Domino Number Patterns provides some slightly more challenging examples of domino sequences.  Learners could use dominoes to make their own sequences for a friend to continue. They could make some sequences with a nine-spot set of dominoes, using this sheet of them.

Having a number line or number square available to mark off numbers might help children identify a pattern.  There are some more similar domino sequences in Next Domino.


Handouts for teachers are available here (Word document, pdf), with the problem on one side and the notes on the other.
The NRICH Project aims to enrich the mathematical experiences of all learners. To support this aim, members of the NRICH team work in a wide range of capacities, including providing professional development for teachers wishing to embed rich mathematical tasks into everyday classroom practice.