You Never Get a Six

It was raining and Tom, Vincent, Charlie and Edward had been playing a game with dice during break.

"You never get a six when you want one," grumbled Charlie, "I'm sure sixes come less than the other numbers!"

"You can all try throwing dice and noting what you get," she said, "It fits in quite well with the work we are going to do next. Throw the dice and make a list of what you get. See if you get less sixes then."

"It's only when it matters if you get a six," grumbled Charlie.

Miss Brown thought for a moment.

"I'll give a Team Point to the one who gets the most sixes," she said, "Mind you, no cheating!"

The boys worked in pairs and made lists of their throws. They all threw the dice the same number of times. Here is the list that Tom made for Edward's throws:

They decided to make each of the numbers on the dice a different colour when they recorded the work so they could compare them easily.

Here is the graph Edward made from his figures:

Here is Charlie's unfinished graph (he hasn't labelled anything yet): 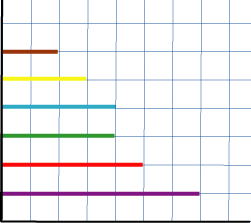 Who won the Team Point for the most sixes?